If the idea of watching the Best shows on YouTube TV excites you, look no further. YouTube never disappoints. There are loads of TV shows to keep you hooked up.

The streaming app allows you to enjoy everything from comedies, dramas, cartoons, crimes, and well, anything you wish to watch. If a fan of YouTube, you can definitely carve some time and check out our list of the best shows on YouTube TV, including Originals series, behind-the-scenes, animal shows, animated Sci-Fi, and comedy extravaganzas. All are great.

See, if you want to access YouTube TV in Canada, you can use a powerful VPN. And if you encounter a YouTube TV VPN detected error, few options are available. One, you can check whether you’re connected to the VPN server, or you can try changing your VPN provider to our recommended best VPNs for YouTube TV.
Here we go! 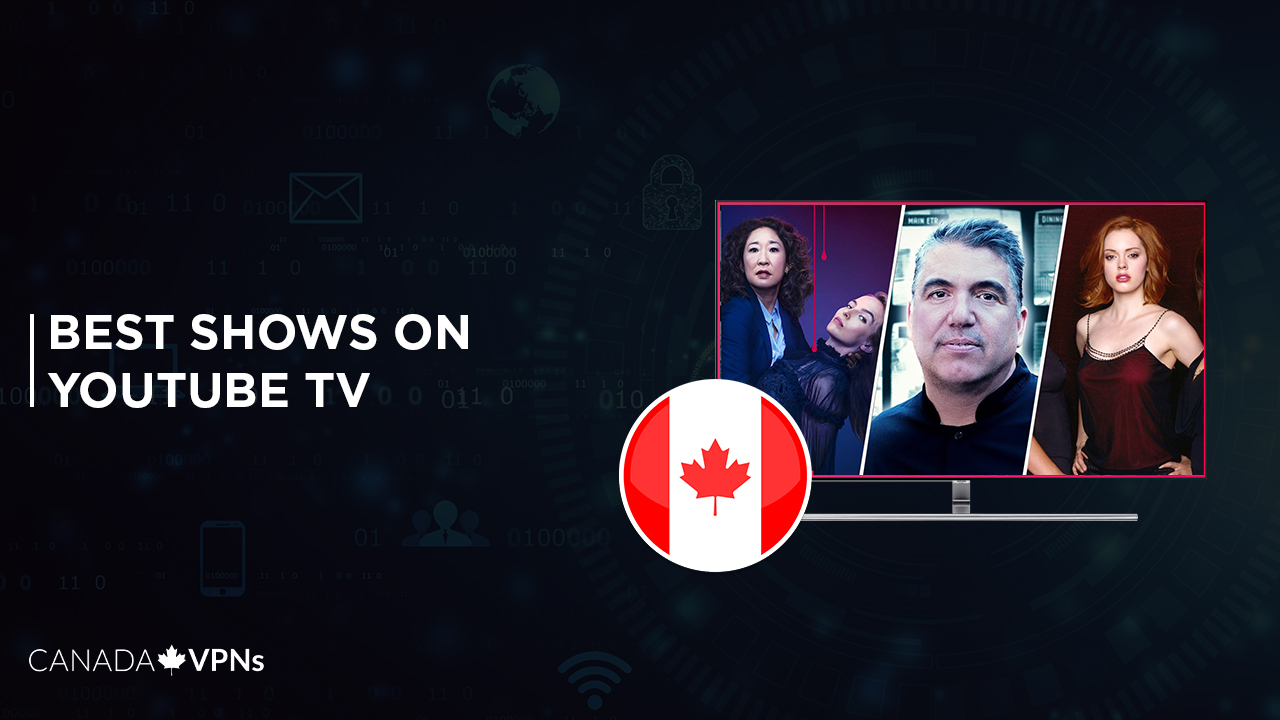 Here’s our top pick of the best YouTube TV shows to watch in 2022:

Killing Eve is one show of its kind. At times, it can be gruesome and hysterical. It features Eve Polastri as Sandra, an intelligence investigator who gets fired from a security service (MI5). Eve is very interested in female assassins; she gets delighted when a secret division (MI6) recruits her to capture an internationally skilled assassin, Villanelle (Jodie).

But when the task begins, the two develop a mutual obsession, and both get desperate to know more about each other. The show is compulsively watchable; you don’t feel like taking a break once you start. Don’t miss it out on YouTube TV.

The jungle atmosphere; kill or get killed!

Savage Kingdom is an action-packed documentary that you can comfortably binge in one sitting. It’s an animal kingdom like no other. Nothing seems safe to escape the hungry tomcats in the remote African savanna. The harsh environment is governed by ruthless skilled hunters who compete and survive daily for the fittest.

The feeling is like that in the Game of Thrones with lions, leopards, hyenas, and wild dogs, where everyone fights for every inch of control way down to the last drop of power. And when the time comes, someone will have to beat their last, and another will survive.

Have you ever wondered why some restaurants fail soon after opening? Undercover Chef may have some reasons why this food retails fail to survive. The show follows Mark Estee, an executive chef who is determined to uncover and resolve all the issues that led to the collapse of good restaurants by using hidden cameras. The restaurants are from different states, such as Florida and New York. Later, Mark reports what he found in his three-day scrutiny in each restaurant.

Origin show is one of the YouTube originals. It features a group of troubled people lost in a spacecraft destined for a distant planet. Everyone has to fight to survive. They think they are fighting the same battles, but realize something is amiss.

There is a threat that seems nearer than anyone thought of. The passengers are sure they are up to something but can’t trust each other, and now they have to attempt the impossible. How will their fate be?

The show follows three sisters, portrayed as the most powerful witches. They learn of their unique capabilities following the death of their mother. The powers allow them to protect the innocent ones from evil attacks from demons or warlocks.

Each of the sisters has a unique power that grows over time. And as this happens, they fight their way to maintain everyday life. But this proves to be a challenge, especially in San Francisco, where they live. Unfortunately, their magic have consequences which probe investigations by the FBI

6. When We Left Earth: The NASA Missions

The show is an implausible story depicting humankind’s adventure in space. The documentary miniseries was created to commemorate NASA’s agency’s 50th anniversary in 2008. Its main target is to pass a message about the space race, especially to the millennials.

It features interviews from space and well-known astronauts like Neil Armstrong, among other NASA officials. The documentary is one bingeable piece show for those who love space history. It consists of 6 episodes starting from the first Mercury flight to NASA Gemini the Apollo program, all the way to the International Space Station.

Do you love Robin Hood literature?

Sherwood will take you to the future dystopian 23rd century. Here, Robin Loxley together with friends is battling the Sheriff of Nottingham in an environment full of suffering and disaster.

Diana and Megan help us imagine the future and all the technology involved, making the world feel more realistic. Sherwood is among the best-animated sci-fi best YouTube series. It’s an inspiration to many, especially to today’s young women and girls. It also has some of the best behind-the-scenes specials about Robin and her followers.

The show follows Williams, an ESPN analyst, and a former college basketball player who is mentoring a group of an inner-city high school team after being fired from his job. Best Shot is about mentoring in complex social issues, the struggles faced by the boys who aspire to become men of valor. It’s a good show for families; it can sprout out heavy discussions concerning life.

The show is one of the best things to watch on YouTube. Even if you have never come across BTS, you will get hooked up immediately. BTS: Burn the Stage revolves around a group of 7 South Korean BTS as they move across the globe to achieve dreams, enjoy life, dance, face life’s troubles, and enjoy their love for music.

Through the 8 episodes, you will see the genuineness of the BMS group, who has to behave as humans rather than idols to their fans. The group has faced too much insecurity as they rise to fame, and still, they choose to continue to achieve their dreams. And in the end, patience pays.

Sideswiped is one of the YouTube TV shows worth your time. The show features three women. Among them is one single woman, Olivia, who is portrayed as the main character. At the age of 35 she has vowed to date every one of her 252 tinder matches, which he swiped off while drunk.

She has a young married sister Jayne who is on a marriage itch, trying to maintain her identity even after the birth of her daughter. Both ladies are joined by Mary, their mother whose husband died sometime back due to a heart attack. She is also determined to take part in the dating process viewed online.

The three are facing the same fate, but in different dimensions, and are out to look for their life’s meaning.

The Impulse is based on a 2013 novel, the third novel in the Gould Jumper series. It gives the story of a 16 years old Henry Cole who discovers he has a gift of teleportation but cannot control her destination.

The gift is unleashed when in a truck together with her high school basketball captain and Clay, who attempts to rape her. She teleports much more when she learns of her abilities, which leaves Clay in a condition of paraplegia.

Indeed this is a good sci-fi premise that will leave you yearning for more. Don’t forget to connect to a good streaming VPN such as ExpressVPN, Surfshark, and NordVPN.

The show features Ryan, who wants to have home detectives partner with Hollywood actors. These then take advantage of the actor skills and help solve murder cases. The show is hilarious. If you love crime movies, watch the two seasons on YouTube.

The show is one of the best things to watch on YouTube. You will love it from the very first episode. Besides, you will connect with every character and feel the vibes of the dance.

It features the students and teachers of high water faulty who are out for adventures. Soon after, Tal and Janelle get relocated after their mother gets into drugs, and finds herself in prison, forcing them to wallow their way out in the world. And when the chance to dance provided by Sage Odom, a famous musician hits in, they discover the new world has something in store for them.

Mind Field focuses on the human brain and how consciousness plays a part in daily influence. In this show, Michael Stevens seeks to explore how our health, brains and development are affected by our devotions on social media and how we feel the need to be stimulated all the time.

He conducts some of the experiments or calls in volunteers to help expound on the effects of sensual deprivation on the brain.

Champaign ILL shows how the rappers can’t manage to live in the real world after the death of their friend, who too was a superstar.

You can taste the show’s momentum as you watch the two men sharing chemistry. The show is so bingeable. You can watch it on YouTube TV Canada. Statistics how it has a higher demand in Canada than any other comedy title. It’s a true cringe-comedy worth breezing through your weekend afternoons.

16. Friday Night In with The Morgans

The Friday Night In with The Morgans is one great discussion show that gave people a sign of relief during the pandemic. At the same time, it helped spread the message of how black life matters. It was meant to provide entertainment when everyone was keeping social distance in their homes.

The comedy series features the life of Liza Koshy, who is out on hectic misadventures that leads her to take odd jobs to climb the ladder and become an “elite tasker.” The show is fun to watch and educative on issues of mental issues, especially for teens.

Wayne is one of the best YouTube TV shows with impeccable performance. It features Harry, a 16 years teenage boy who set out to retrieve his father’s vehicle that was stolen before his death. He decides to take a trip with Del, his new crush. They know nothing about the whereabouts of the car except the country where they believe it to be (Ocala, Florida). Harry and Del face numerous heartfelt situations as they travel. Will they make it to get the car?

The show features Lawrence, who, after swallowing defeats from Daniel LaRusso in Karate Tournament in 1984. He is working as a part-time handyman after great suffering under the hands of Kreese, who assaulted him.

Lawrence uses his karate skills to protect his teenage neighbor. And this prompts her to re-awaken his karate. Soon, they meet with Daniel, and both become martial–arts rivals once more. Cobra Kai emerged as one of the best-received shows at YouTube with a 100% approval rating for season 1

The show features furious battles between the strongest, toughest animals in the world as each struggles for their mating rights in the American grasslands.

They portray some of the tactics that even the most incredible human champions cannot employ.

If you love to see the tactical skills of deadly duels, don’t miss out on the National Geographical series on YouTube. It’s worth binge-watching. If you’re looking for a quick binge, also check out our top picks for the best YouTube TV movies.

Our selection of the best shows on YouTube TV will give you all the entertainment you long for. You will enjoy most of the YouTube Originals and other best classics; some of which you can watch for free. Or you may also unlock more content through YouTube TV free trial. Unfortunately, some of the series may disappear after some time, so it’s better to watch right now. But even if this happens, there will still be plenty of stuff to stream.