Malware: Here’s how your Smartphone could be Hacked without your knowledge!

There’s no denying that our smartphones are the main hub of our lives. It holds our darkest of secrets, banking details, social connections, and pretty much our entire life! And that’s the exact reason why these little gadgets are common targets for hackers. And despite all Silicon Valley’s geniuses, mobile malware continues to penetrate official app stores and compromises several mobile devices every day. 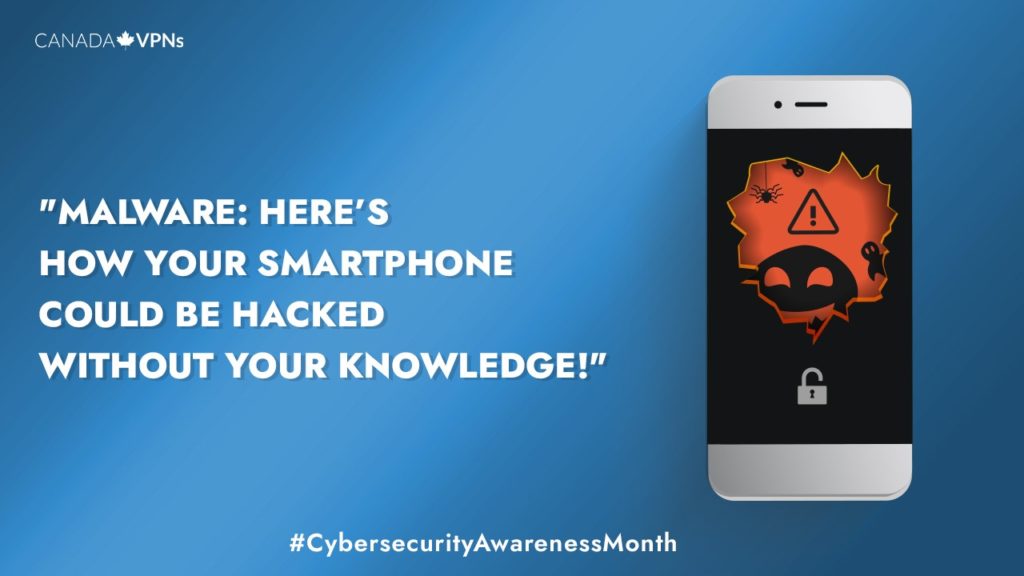 In fact, passing your digits is all it takes to put you at risk of phishing attacks, malware infiltration, or identity theft.

“If someone has your phone number, they are likely to have their identity as well, so don’t be surprised.”

And the most terrifying thing is that the majority of people don’t even know that their phones have been hacked. According to the report by McAfee 2020 Mobile Threat, about 56% of mobile malware apps hide on a device without any home screen icon, exposing the device to dangerous unwanted ads, data theft, and account credentials to use and sell on the dark web.

The latest survey reveals that around 63,234 total cyber crimes have been reported in Canada. To find out the most targeted region in Canada, check out this video:

Not sure if you have been hacked? As part of our Cybersecurity Awareness Campaign with a theme “Don’t take the bait, keep your Cybersecurity up-to-date,” we have assembled the list of telltale signs to help identify if your smartphone is under attack:

Five Signs that your Smartphone may have been Hacked

While a smartphone’s battery life inevitably declines over time, a malware-infected smartphone may start to show a noticeably reduced lifespan. This is because the malware might be consuming your phone resources to scan your device and transfer all the details back to a hacker server.

So, if your smartphone’s battery starts to drain a lot faster than usual, get it checked by the cybersecurity expert or your local mobile phone vendor for any potential intrusion. A drastic drop in battery life signifies that your phone has been hacked, and malware is running in the background, causing excessive battery drainage.

If your phone is recurrently freezing or crashing while using certain apps, this might be a sign of malware presence that is overloading your phone’s resources or disrupting other apps’ functions. You might also find some apps constantly running in the background despite attempts to close them or even find your device crashing itself or rebooting repeatedly.

Another sign of a compromised smartphone is an unusual amount of data usage. If you notice a significant increase in the data bill at the end of the month, this indicates that malware is consuming your data to transfer information back and forth to your device.

4. Unknown apps on your device

Do you find something on your device that you don’t recall downloading? Then, immediately scan your phone for malware! A mysterious presence of unwanted apps could be the presence of malware hiding in your phone in plain sight. Also, be wary of the list of calls or texts that has been sent from your mobile phone. If you notice a call record or text that you don’t know, these could be signs that malware is forcing your phone to place calls – the charges of which go into the cybercriminal’s wallet.

Annoying pops on the site is the ultimate indicator of an insecure website. Similarly, constant pop-ups alerts could indicate that your smartphone might have been infected with adware – a kind of malware that forces the users to see ads or pages that earn revenue via clicks. Even if pop-ups aren’t a cause of malware, it could be phishing links that lure users to enter their sensitive information – or even download malware.

What should you do if your Mobile Phone is Hacked?

Found all these symptoms on your smartphone? Here’s what you can do to prevent hackers from stealing your information:

Scan your phone for any mysterious or unusual apps. If found any, immediately delete/uninstall it from your phone. If you’re an Android user, follow these steps to uninstall an app from your device:

Android users can download McAfee or Bitdefender on their devices to prevent malware infiltration. This software are designed to identify and restrict malware from infecting your device. You can also use a VPN for online browsing. It encrypts your internet connection, thereby preventing a hacker from identifying you.

Another method of warding off cybercriminals is to reboot your phone constantly. Sen Angus King, a member of the secretive Senate Intelligence committee, has found that rebooting a phone once a day can thwart the attempts of even the most efficient hackers. So, make it a habit to restart your phone at least once a week. The action might not guarantee a complete immunity against the malware, but it will surely give tough times to hackers trying to penetrate your device.

4. Protect Your Device with Multi-factor Authentication

It’s best in your interest to set your account to Multi-Factor Authentication (MFA). It is an effective security method that requires users to enter two or more passwords or security codes to access their accounts. So, even if your basic credentials are compromised, your accounts will still be protected via MFA factors such as a thumbprint or facial recognition security tools.

In case of a hacked phone, experts recommend factory resetting your device as it will break the connection between the cybercriminal’s server and your device. However, before proceeding, you should know that the action will wipe everything from your phone, including photos, apps, contacts, and other files.

Here’s how you can factory reset on Android devices:

If you’re using an iOS device, follow these steps to factory reset your smartphone:

Final Thoughts: Be extra vigilant about what you download

No matter whether you’re an Android or iPhone user, you should be extra careful about downloading apps outside the official app stores because they may contain malware. That said, shit happens all the time, right? You may even accidentally download malicious software while using public Wi-Fi. In that case, you should make a habit of using a VPN before connecting to public Wi-Fi, as it hides your identity and encrypts your online traffic so that the hackers won’t identify you.