Onion Over VPN is a privacy phenomenon that involves using both VPN and Tor simultaneously. It’s like yielding Captain’s shield and Thor’s Mjolnir together… Obviously, you’re going to get an additional advantage over using either of the tools alone.

Now the question arises what is Onion Over VPN exactly?

Basically, what happens is when you browse through Onion Over VPN, your internet traffic goes through one of the VPN servers, passes through the Onion network, and only then reaches the internet. This combined feature offers way more security and privacy advantages than using either of them alone.

Usually, the Onion network can only be accessible through the special browser called The Onion Router (Tor) browser. But now, the facility is being provided by the top-rated VPN providers that don’t require you to install a separate browser. Instead, you just need to connect to a dedicated Onion-over-the-VPN server to have your entire network traffic routed through the Onion network – no additional applications required. 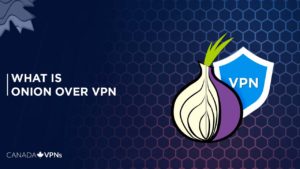 How to set up Onion over VPN?

Before setting up an Onion over VPN, you need to require three things:

Once you have them, here’s how to setup Onion over VPN:

That’s all… you can now enjoy double privacy, anonymity, and security of Tor and VPN combined.

How does Onion Over VPN work?

When you connect to a special onion over the VPN server, your traffic goes through the VPN server first and then passes through the onion network. This way, the encryption is done twice, making it impossible for intruders to keep track of your online activities.

Let us explain to you in other words. Assume you’re on a train trying to leave a country where war just broke out. And for that, you need to change your identity to pass through the guards. So, you stop at one station (the VPN server) where you get a new passport and a fake identity card (a VPN replaces your IP address with the address of the VPN server you connect to).

Then, your train reaches the next station (Onion network). This is where you change your physical appearance, like getting a few makeovers, haircuts, and all. Here, your traffic is routed through a minimum of three relays or nodes (the entry node, a middle node, and an exit node). So, when you reach a border or, say, a final destination (the internet), no one can stop you or recognize you since you will be a completely new person.

Coming back to the technicalities, here’s what happens to your inbound traffic when you connect to an Onion Over VPN server:

Benefits of using Onion Over VPN?

Limitations of Onion over VPN

Onion over VPN has some drawbacks too:

Websites and apps can see that you’re visiting through a Tor exit node. As a result, you might not be able to access some websites and some become nonfunctional.

Who should use Onion Over VPN?

Onion over VPN is quite a handy tool for a wide range of people. For example:

Investigative journalists working on a sensitive news report (such as corruption) might need this tool to remain hidden from the prying eyes of the government.

2. Individuals who deal with sensitive data

Preventing online tracking and ensuring secure data transfer is another reason people use Onion over the Internet. It becomes even more important for people who deal with sensitive data and requires a secure medium to transfer it.

Countries with strict censorship laws, restrictions, and monitoring, like China, Russia, or North Korea, might require using Onion over VPN to bypass restrictions and stay private.

Political figures with sensitive data are at high risk of being hacked. To prevent hacking attempts, they need to make sure that no one intercepts their traffic and penetrates into their devices. And one of the ways to do that is to enable Onion over VPN.

Our recommended VPNs to use with Tor

You may find tons of VPN services in the market – some are affordable, some come free and others are available for high-end premiums. But only a handful of them can actually provide the security we need to access the internet – some of which are listed below:

1. NordVPN – the most reliable VPN for Onion Over VPN browsing

The best thing about NordVPN is that it has a dedicated Onion Over VPN feature, which allows you to access the Onion network without any special browser. It delivers a speed of 85.3 Mbps on average and supports 6 simultaneous connections. It is available for CA$ 4.48/mo (US$ 3.29/mo) - 2 years with 60% off + Threat Protection for free with a 30-day money-back guarantee.

Get to know more about NordVPN review for Canada users here.

Get NordVPN Onion over VPN30 days money back program

2. ExpressVPN – the fastest VPN in the industry

Known as the best VPN in the industry, ExpressVPN offers 3000+ servers in 94 countries with a variety of powerful security and privacy features. It uses AES 256-bit encryption, kill switch, no-logs, and DNS leak protection. It is also compatible with the Tor browser and can easily be used for Onion over VPN.

Get ExpressVPN- for Tor over VPN30 days money back program

Surfshark is known for offering quality services at affordable rates. It offers 3200+ servers in 65 countries, offering worldwide coverage to stream content wherever you want.

As far as Onion over VPN is concerned, it can easily be used with the Tor browser with speeds of up to 80.3 Mbps on a 100 Mbps connection. The best part about

Surfshark is that it allows unlimited simultaneous connections on a single subscription account. It’s available for CA$ 3.13/mo (US$ 2.30/mo) - 82% off VPN deal on 2 year plan with 2 months free with a 30-day money-back guarantee. You can learn more about Surfshark VPN review for Canada here in this blog.

Get Surfshark VPN with Tor Browser30 days money back program

Onion over VPN vs. VPN over Onion 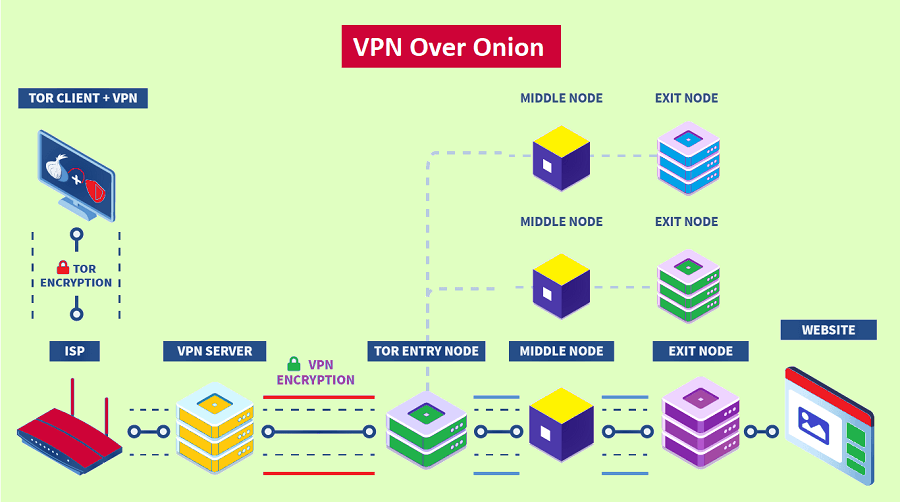 VPN over Onion is an alternative to onion over VPN, which means the Onion comes first over the VPN server. It switches up the entire order flow, as your traffic first goes to the Onion network and then to the VPN server. This whole process serves a different purpose with its own set of pros and cons.

However, setting up a VPN over Onion is quite difficult and is not usually recommended by experts. While this order makes it hard for the exit node to see your traffic, it is now the VPN service that can see your traffic again.

It’s a common perception that a VPN doesn’t keep tabs on your activity or connection logs, but in reality, some free services do…

If you’re still confused between these setups, check out the detailed comparison here:

All in all, Onion over VPN is a pretty easy and effective setup. It offers more security and privacy advantages than the other way around.

Is Tor over VPN safe?

Yes, Onion over VPN (a.k.a Tor over VPN) is much safer than you can imagine. It is an advanced privacy feature suitable for users in dire need of maximum security and privacy. It involves transferring your data through a VPN server and then the onion network before reaching its final destination, thereby ensuring you the utmost security while browsing the internet.

Should I use onion over VPN?

Users in need of maximum security and privacy should definitely use Onion over VPN. This feature stands out from typical VPN services due to its extraordinary capabilities of keeping your TOR traffic hidden from ISPs and other surveillance actors. In addition to hiding your actual IP address from the entry nodes, it also routes your DNS requests through the TOR network, allowing you to access the dark web.

So, in short, you need an onion over VPN technology to shield your data from ISPs, snoopers, hackers, and other malicious actors. Similarly, it helps improve your device security through a double encryption facility.

Why does onion over VPN slow down the speed?

Since your traffic goes through multiple servers and tunnels, you experience a slower connection. Furthermore, the addition of these intermediary servers elongates your traffic route, which causes a significant delay in reaching the destination. However, you can shorten this route and improve your speed by opting for a VPN with a built-in Onion over a VPN server such as NordVPN.

Does the Onion browser have VPN?

No, the Tor browser does not have a VPN. However, some VPN providers have incorporated the Tor browser into their service. For example, ExpressVPN has an ‘onion’ version that allows users to make an anonymous account. NordVPN is another service, encouraging users to use Tor through its dedicated “Onion Over VPN server.”

Onion Over VPN is a highly advanced privacy setup that first sends your traffic through a VPN server, then to the onion network before reaching the destination. It is a smart way of securing your online identities from online snoopers while also accessing websites that are geo-restricted in your region.

Combining Tor with reliable VPN services such as ExpressVPN, NordVPN and Surfshark not only enhances your security but also ensures that you remain hidden while browsing dark websites.