How to watch NFL in Canada 2022? – Stream all NFL Playoffs Live Online without Cable!

Nothing excites a Football fan more than the uninterrupted streaming of the thrilling NFL games. Doesn’t it? Sadly, geo-restrictions and regional blocking make NFL streaming difficult for football fans in Canada. But don’t worry! Just like always, CanadaVPNs has come up with a perfect fix to watch NFL in Canada using a VPN.

As we all know, the National Football League (NFL) is America’s most-followed sports event, with fans all over the globe. The event has been broadcast live on various streaming channels. However, some of these services are not available in Canada due to geo-exclusive licensing policies.

Besides, some of the NFL matches are even subjected to regional blackout – a term refers to broadcasting restriction enforced by authorities where the game cannot be broadcasted in the regional market until all of the tickets are sold.

As the NFL 2021-22 game season is in full swing, football fans in Canada must be looking for a place to watch and follow all of the NFL games from Canada and abroad. So, here’s our guide on “how to watch NFL in Canada,” including Playoffs, schedule, and everything related to NFL streaming Canada. 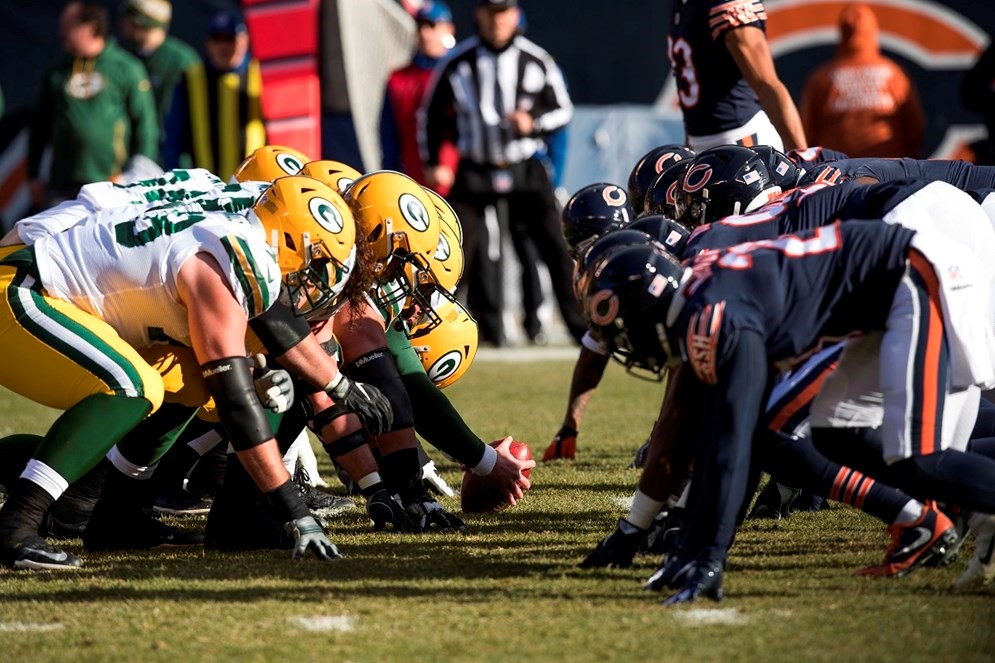 How to watch NFL in Canada online without Cable?

Canadians can watch NFL in Canada without cable through plenty of online streaming channels. But it all comes down to the use of a good VPN.

For American viewers, it’s easy to stream all NFL games for free online. Sadly, it isn’t the same for us neighbors just yet. But with a reliable VPN connection, we can bypass these restrictions and stream NFL in Canada without any virtual hurdles.

Note: You can watch NFL in Canada 2021-2022 games on live Peacock tv, Sky Sports channel, Hulu Live tv network, USA Amazon prime video service by using a VPN connection because all these are geo-restricted in Canada but a VPN can easily by-pass these barriers.

During our research on NFL streaming Canada, we have found the following streaming services offering live coverage of all the NFL matches in Canada. Bear in mind that some of these services are region-restricted and can only be accessed through a premium VPN.

The recommended method to watch NFL games in Canada is the NFL Game Pass. It is the official on-demand streaming platform, offering you access to every single NFL game, including live NFL games of the 2021-22 season, pre-season, regular season, the playoffs, and the Super Bowl. Canadians can access NFL Game Pass through DAZN that is available for $20/month and $150/year.

And even then, you need a separate subscription to NFL Game Pass Pro, which costs around CAD 199.99. Quite expensive, isn’t it? But if you connect to ExpressVPN US servers, you will save up to CAD 75. So in this way, you can stream all the thrilling NFL matches without spending the goddamn fortune!

It’s important to note that NFL Game Pass is often subjected to regional blackouts, inhibiting users from watching some NFL matches. But this won’t be an issue if you use a powerful VPN.

And if you’re not satisfied with the Game Pass, you can always opt for other streaming services such as YouTube TV, Sling TV, Hulu Live TV, and FuboTV, among others. But again, these services are geo-restricted and require a VPN connection to access. So, all things considered, VPN should be in your closet if you want to keep enjoying NFL streaming in Canada.

That said, let’s look at the Best VPN service to stream live games of the NFL in Canada.

The Best VPNs to stream NFL in Canada

You may find hundreds of VPN services claiming to unblock and watch NFL live streams in Canada, but only a few live up to their promises. And three of these are mentioned below:

1. ExpressVPN – the fastest VPN to watch NFL in Canada

In our testing, ExpressVPN delivers a streaming speed of 94.1 Mbps on a 100 Mbps connection, which is quite fast, if you ask us. Moreover, with its powerful unblocking capabilities, you can unblock geo-restricted sports streaming services such as Kayo sports from Australia, ESPN plus live streams in Canada, Australian channel Optus Sport, FuboTV, and many more.  Its monthly subscription is available for CA$ 8.59/mo (US$ 6.67/mo) - Save 49% and get 3 extra months FREE with 12-month plan that also comes with a 30-day money-back guarantee.

2. Surfshark – the most affordable VPN to NFL Online Streams

No service can beat Surfshark when it comes to affordability! The provider offers 3200+ servers in 64 countries, fast speed, and powerful online security – all that for only CA$ 2.96/mo (US$ 2.30/mo) - 82% off VPN deal on 2 year plan with 2 months free. Not just that, you can connect unlimited devices simultaneously on a single subscription that comes with a 30-day money-back guarantee. What else do you want, huh?

NordVPN is another VPN service you can subscribe to for NFL streaming Canada. With its largest network of servers (5500+ in 59+ countries), you can unblock various geo-restricted services such as the oldest US TNT channel, French channel TF1, Austrian channel ORF, DStv live streams in Canada, and many more. The subscription is available for CA$ 4.24/mo (US$ 3.29/mo) - 2 years with 60% off + Threat Protection for free. And similar to ExpressVPN and Surfshark, NordVPN also offers a 30-day risk-free experience to its users.

Why do you need a VPN to watch NFL streaming in Canada?

NFL streaming is not available in Canada due to broadcasting restrictions on certain streaming channels. And because of that, Canadian fans won’t be able to watch the entire NFL season on television. However, a VPN comes in to help break this blockage and lets you live stream NFL in Canada.

VPN redirects your traffic through encrypted servers and changes your IP address to a new one, allowing you to bypass the virtual barriers on streaming services like YouTube TV and NFL Game Pass so you can watch your favorite NFL matches without any restriction. This will make you appear in the country where these services are permissible.

How to watch NFL Online Free Live streaming in Canada?

You can watch NFL 2021 season matches for free in Canada by signing up for a free trial. Streaming platforms like NFL Game, YouTube TV, Sling TV, and Fubo tv all offer a limited trial period for viewers to experience their services for free. So if you’re not fond of spending your money and still eager to free stream NFL games, you can try subscribing to these services and enjoy the free NFL streaming in Canada until your free trial lasts.

Since these streaming services are not available in Canada, it’s better to change your location through a VPN and sign up for a free trial without any trouble.

We recommend you subscribe to a reliable VPN service like ExpressVPN, Surfshark, or NordVPN, which will help you get the most reasonable rates for a Game Pass subscription and other Canadian NFL channels.

For complete free NFL streaming options in Canada, you can refer to:

7plus – broadcast only 2 Sunday games every week 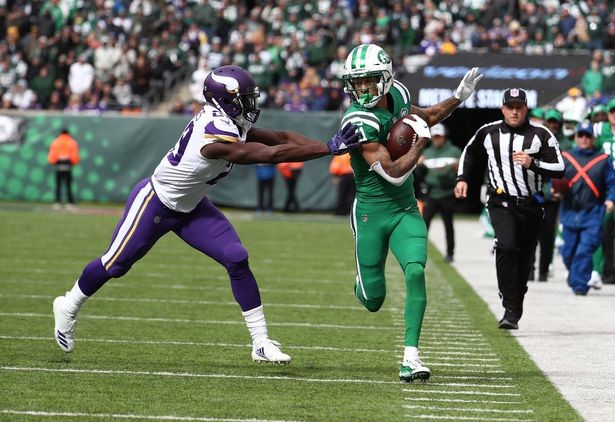 You can watch NFL games on almost all major devices. However, after downloading an NFL app on your device, you need to connect to a VPN to stream NFL games 2021. Here’s how you can do it:

How to download the NFL app on Android and iOS?

How to watch NFL in Canada on PC?

Here’s how you can stream NFL matches on PC:

How to stream NFL in Canada on Apple TV?

You can watch NFL games on Apple TV via multiple channels and services. However, since you can’t set up a VPN directly on Apple TV, we suggest using a router.

The National Football League (NFL) enters the 7th week, featuring some exciting football matches ahead. Here’s how the NFL schedule for the upcoming week looks like: 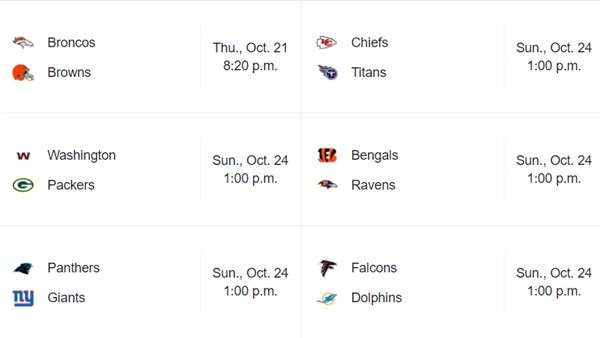 Where can I watch the Thursday Night NFL game in Canada?

Dazn is the official broadcaster of NFL games in Canada. However, these services are often subjected to regional blackouts. To have a blackout-free NFL streaming in Canada, consider connecting to a US-based VPN server and tune into the NFL Game Pass. It offers live coverage of all the NFL matches, including Thursday night NFL games, NFL playoff, highlights, analysis, and everything. You can also watch NFL on Canadian TV channels like CTV or CT2.

Where can I watch NFL games in Canada for free?

Canadians can stream NFL games for free via the Yahoo! Sports App. You can also subscribe to Youtube TV, FuboTV, or Sling TV and avail of their free trial periods to watch NFL free for a limited time. However, these services are geo-restricted in Canada and require a VPN connection to access.

So, in short, VPN has all answers to your queries related to “how to watch NFL in Canada without Cable.” If nothing else, you should have a VPN app on your depository for uninterrupted live sports streaming, including the NFL, WRC, MLB, English Premier League, ICC T20 World Cup, IPL, and any other sports event. We recommend you to subscribe to a premium VPN service like ExpressVPN, as it offers fast speed and awesome server connections to stream NFL games online in Canada. Whew… aren’t VPNs so great? Yeah… we feel that too!