Are you looking for a way to watch BBC iPlayer outside the UK? You will need the best BBC iPlayer VPN. The streaming service is worth the effort to look for a quality VPN.

But, when it comes to iPlayer, it’s totally free. You don’t have to spend a cent to watch your favorite shows and movies on iPlayer.

You wouldn’t want to miss out on entertaining shows, including Killing Eve, Peaky Blinders, Doctor Who, etc. And just to remind you, you get all that entertainment at zero cost.

As we mentioned earlier, the streaming platform is worth every effort to stream when you happen to be outside the UK. And for that to happen, as we also mentioned, you need a quality VPN. But how can you tell for a quality VPN? 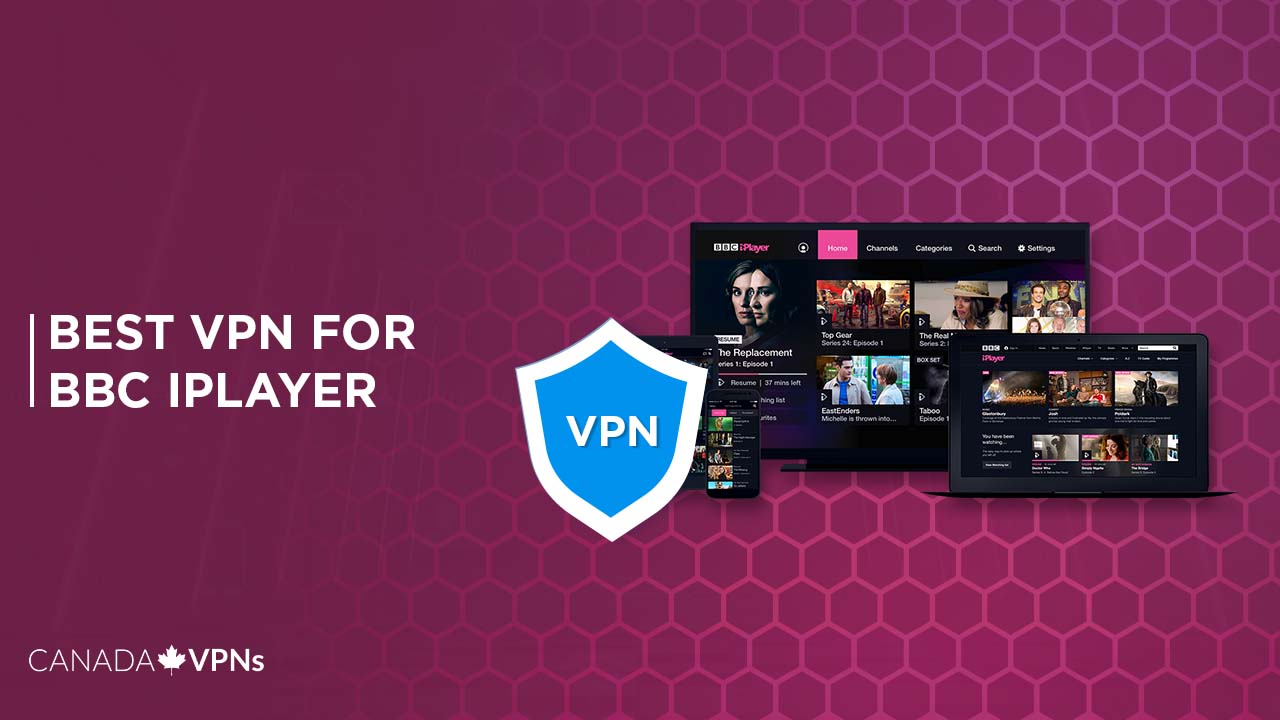 Check out our tried and tested VPN choices that can unblock BBC iPlayer in Canada easily.

When it comes to ticking the best BBC iPlayer VPN boxes, it must consist of fast servers. The last thing you want is a VPN that will decrease your internet speeds. But, on the other hand, you don’t want your internet to buffer while streaming your favorite show online or watching live sports events.

The best VPN must consist of a large collection of servers. For example, to watch iPlayer in a country like Canada, you will need to connect to a server located in the UK. 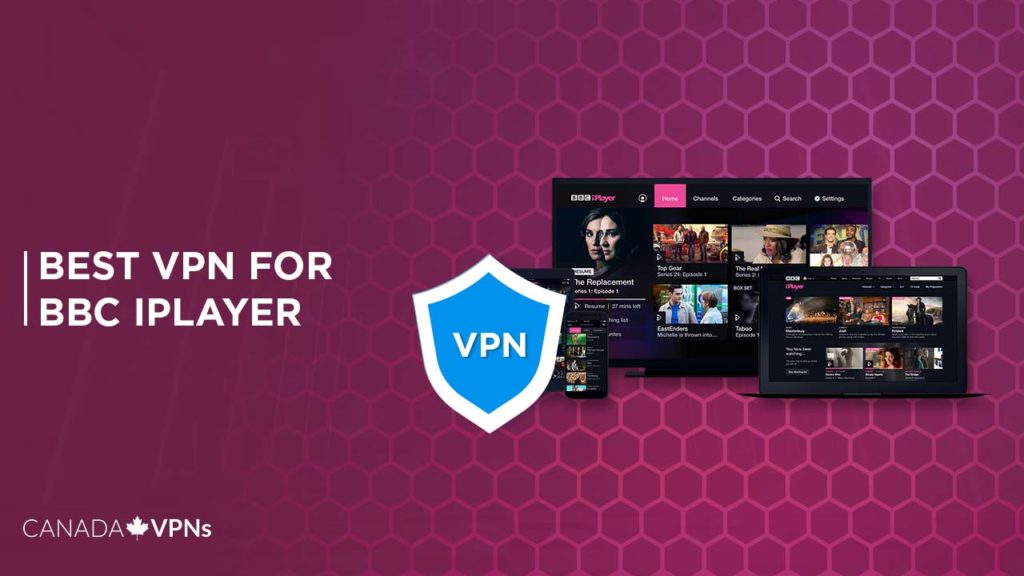 Not everything runs smoothly. Along the way, you will have problems, and you might need to be assisted. Therefore, a good VPN must ensure good customer care service 24/7.

The live support team will prove to be useful because if anything happens, a quick message will get back in a matter of seconds.

Also, the best BBC iPlayer VPN needs to have a friendly user interface. You need a VPN that is easy to work with and one that doesn’t have many instructions. Many instructions can be confusing, especially for someone new to the VPN.

If you can still unblock BBC iPlayer in Canada, check our guide to fix the issue because fun should not be interrupted!

There are many VPNs available, some are free, and others are not, as you have to pay for their services. We have done our research and narrowed down the best three VPNs capable of unblocking the geo-restrictions that BBC iPlayer executes. They are, 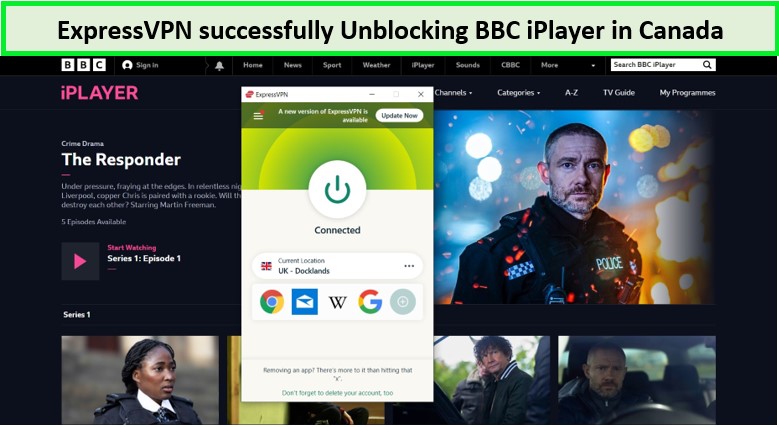 ExpressVPN is the face of VPNs. It does everything that a VPN should do. When it comes to bypassing geo-restricted platforms, ExpressVPN has a good history, with successful results of unblocking major streaming services like Netflix, Hulu etc.

ExpressVPN also unblocks BBC iPlayer, the reason it is the number one recommended BBC iPlayer VPN. Moreover, it consists of excellent features not present in many VPNs, such as VPN split tunneling, Lightway Protocol etc.

The good thing about ExpressVPN is that it lets you test it before subscribing to it. In addition, it offers you a 30-day free trial, and if you happen not to be interested in the service, you can decide not to subscribe. And if you are happy with the service, you will continue using the VPN on a paid subscription when the 30-day free trial expires.

Earlier, we talked about a VPN consisting of a vast collection of servers; when it comes to ExpressVPN, it consists of over 3000 servers available in over 90 countries. To stream BBC iPlayer, you will need to connect to a server located in the UK.

That is not a problem for ExpressVPN, for it has servers available for UK-London, UK – East London, UK – Wembley, UK – Docklands. Connecting to any server in those places, you will watch BBC iPlayer from anywhere.

With ExpressVPN, you don’t have to worry about internet speeds going down. Instead, its servers are super -fast, making sure you will not experience buffering while streaming Spider-Man: Homecoming on BBC iPlayer.

ExpressVPN does offer you a 30-day free trial, but that means you have to subscribe once the trial period ends. They have three plans available, with the most popular one being CA$ 8.96/mo (US$ 6.67/mo) - Save 49% and get 3 extra months FREE with 12-month plan. The plan also includes three months free and a 30-day money-back guarantee.

Read more about ExpressVPN for Canada in our review. As it is one of the top Soccer VPNs to stream FIFA World Cup 2022 on BBC iPlayer for free in Canada.

Surfshark is one of the best VPNs available and one that is worth getting. Moreover, it’s a VPN that is widely recognized as a pocket-friendly VPN.

If you are on a budget and want to watch BBC iPlayer, you should consider getting Surfshark as your BBC iPlayer VPN.

With Surfshark, it doesn’t matter where you are located; you will be able to bypass geo-restrictions and watch BBC iPlayer from anywhere. 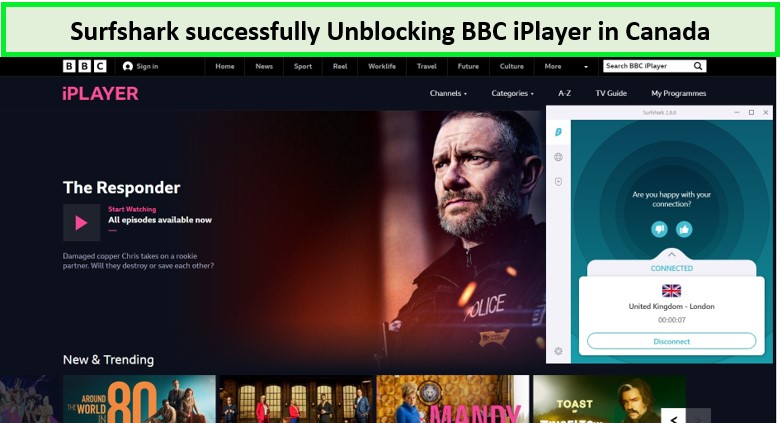 With Surfshark, you won’t be short of servers to connect to, for it consists of over 3,200 servers located in over 65 countries. To stream BBC iPlayer, you have to connect to a server located in the UK. Surfshark has many servers available for the UK, so all you need to do is connect to any server in the UK, and you are ready to start streaming.

The servers are fast enough, enabling you to stream content in HD resolution without experiencing buffering while streaming.

When it comes to unblocking sites that impose geo-restrictions, Surfshark has a good record as it is known to unblock major streaming services such as Netflix USA, Hulu, Amazon Prime, and HBO Max, etc.

The servers are well equipped with excellent features such as a Strict no-logs policy, Private DNS & leak protection, Camouflage Mode, and a Kill Switch feature. The Kill Switch feature is a useful tool as it makes sure that your sensitive data won’t be exposed even when the connection drops.

Have an insight about Surfshark VPN in our detailed guide.

You can rely on NordVPN to stream BBC iPlayer in 2022 without having any issues. When it comes to unblocking geo-restricted sites, NordVPN is the best; it consists of over 5200 servers located in over 60 countries.

To unblock BBC iPlayer with NordVPN, you will need to be connected to a server located in the UK. NordVPN has over 400 servers located in the UK, enabling you to stream content based only in the UK. In addition, the servers are well optimized with features such as Private DNS, Double Protection, Split Tunneling Support etc. 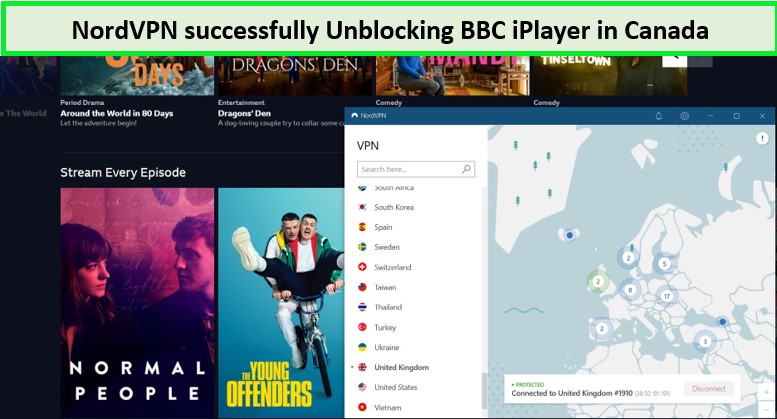 When connected to NordVPN, you don’t have to worry about online safety, for you will be protected from hackers, ISP, malware and Phishing.

All your online activity will be kept private, for the servers are well optimized with security features. In addition, the servers are super-fast. With NordVPN, you don’t have to sacrifice speed for security, for you get both.

While streaming His Dark Materials or any other show on BBC iPlayer with NordVPN, you are assured that you will not face any interruptions. For you won’t experience any buffering.

To get NordVPN as your BBC iPlayer VPN, you need to subscribe to one of their available plans. The plan with the best value is that of CA$ 4.42/mo (US$ 3.29/mo) - 2 years with 60% off + Threat Protection for free

Get to learn in more detail about NordVPN review in our guide.

How do I unblock BBC iPlayer with a VPN?

Now that you are aware of the best BBC iPlayer VPNs, what’s left for you to know is how to unblock BBC iPlayer using a VPN. Below is how:

Can I use a Free VPN for BBC iPlayer?

Most of them don’t have the quality features needed to bypass the geo-restrictions of BBC iPlayer. Therefore, they get detected and blocked easily.

But even though some of them do manage to bypass geo-restrictions, the speeds are disappointing, for they are too slow for streaming. Therefore, causing you to experience buffering, making it hard even to stream a show.

So, if you want to enjoy streaming BBC iPlayer, you have to use the best BBC iPlayer VPNs mentioned above. However, if you happen to be on a budget, Surfshark is one of the best and the cheapest VPN worth subscribing to. You may also see some of our recommended Free VPNs to try in Canada.

Also, the VPNs mentioned above consist of a 30-day free period, and you can take advantage of that to stream BBC iPlayer.

What is Best on BBC iPlayer? – Shows and iPlayer Originals

Check out our pick of the best movies available on BBC iPlayer.

Here are the best shows you can enjoy on BBC iPlayer.

Which is the best VPN for BBC iPlayer?

The best VPN to stream BBC iPlayer is ExpressVPN. It consists of super-fast servers available for UK servers.

Can you watch BBC iPlayer with a VPN?

Yes, you can watch your favourite shows on BBC iPlayer using a VPN when outside the UK.

How does BBC iPlayer know I'm using a VPN?

The BBC detects IP addresses trying to access it outside the UK and restricts them from doing so. BBC iPlayer detects that you are using a VPN because the VPN you are using is not masking your IP address well.

Why can't I watch BBC iPlayer with my VPN?

You may have a problem accessing iPlayer with a VPN because iPlayer has already blocked the servers you are using.

Can the BBC track your IP address?

BBC iPlayer collects information on your IP address to know the actual location you are accessing it from.

Is it illegal to use a VPN for BBC iPlayer?

No, it’s not illegal to use a VPN for BBC iPlayer. But using a VPN, you will be going against BBC iPlayer’s terms and conditions.

BBC iPlayer consists of entertaining on-demand content that you shouldn’t miss out on. But unfortunately, BBC iPlayer faces geo-restrictions and is only available in the UK. So, if you are outside the UK, you won’t be able to access BBC iPlayer.

The only way to access BBC iPlayer is by using the best BBC iPlayer VPNs available. The VPNs mentioned above are the best and capable of bypassing the geo-restrictions imposed by the BBC iPlayer. Get ready to enjoy a rollercoaster of fun with Christmas shows, horror, suspense, and much more!