How to use VPN on Kodi with Three ways – Your Ultimate Guide! [April 2022]

Learn how to use VPN on Kodi with our ultimate guide!

No, not the dog Kodi, a son of Balto and Jenna from Balto 3: Wings of Change. Not even Kodi Smit-McPhee, a 25-year-old Australian actor, who shocked the critics with his outstanding performance at The Power of the Dog.

The Kodi in question is not a movie character or an actor per se… It’s a free, open-source media platform that allows you to manage and stream your locally stored collection of content – including movies, music, and games – on almost any device (without any separate streaming subscription). It’s a perfect option for building your ultimate all-in-one entertainment center. But if you’re not using Kodi with a VPN… well, you should be!

Without a VPN, you will most likely encounter all sorts of problems like dangerous Kodi add-ons, geo-restrictions, blocked apps and content, privacy issues, and more. A VPN is literally a god-sent here! Wondering how to use VPN on Kodi? Here’s your guide!

Whether you’re using Kodi on your smartphone or a Smart TV, this guide has everything you need to know about how to set up a VPN on Kodi for different devices – even for devices without native Kodi support.

So, without further ado, let’s get straight into it: 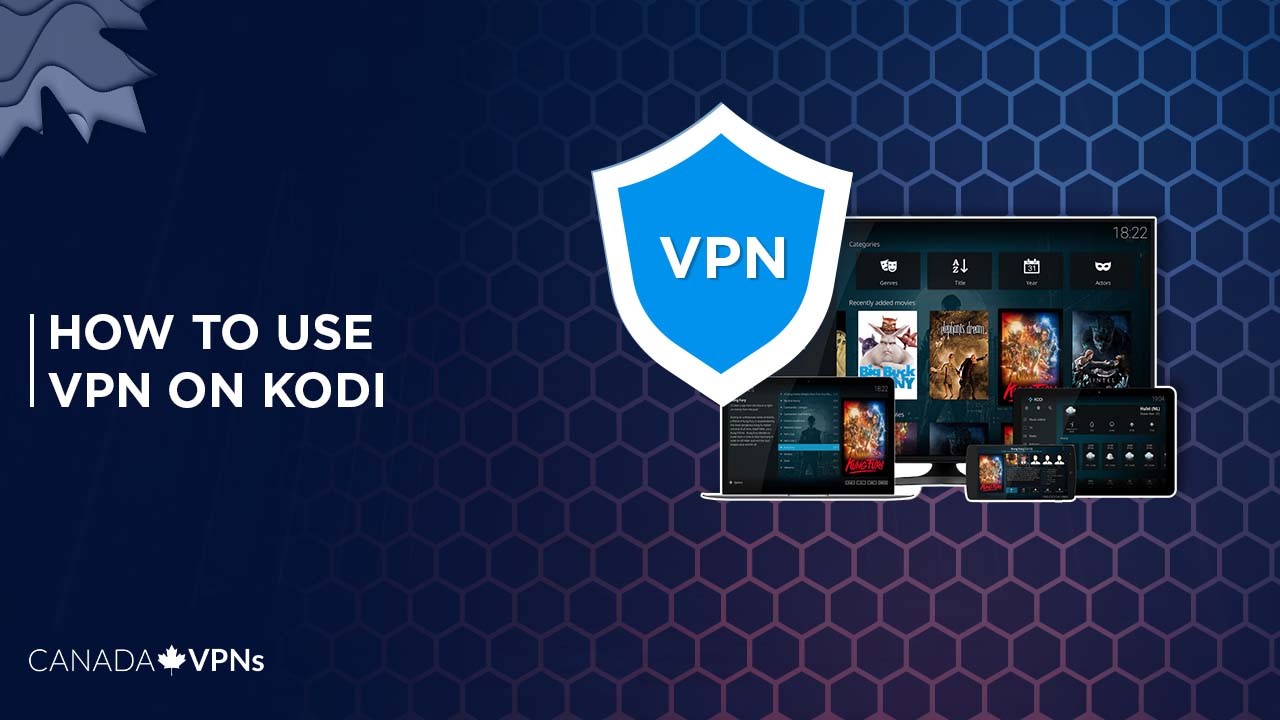 How to use VPN on Kodi – with Three different ways!

With the best Kodi VPN, you can enjoy unlimited free movies, web series, music, podcasts, games, and other kinds of online content with utmost security. Fortunately, installing VPN on Kodi is quite easy.

See how to use VPN on Kodi in the following three ways:

How to Set up a VPN on Kodi

There are three ways to set up a VPN on Kodi:

1. Set up a VPN on Kodi using a third-party VPN app

Using a VPN on Kodi via a third-party application is the safest and the most recommended method. You just need to subscribe to a reliable VPN provider to stream Kodi content securely and anonymously. Here’s the step-by-step guide on how to set up a VPN on Kodi:

Note: With the reliable VPN app installed on your device, your entire device traffic will be encrypted, not just the Kodi application. You can also browse anonymously without any fear of being tracked online.

You can also use a VPN by installing a built-in Kodi add-on. Here’s how you can do it:

Note: You might not find a separate Kodi add-on for all VPN providers. In that case, you can install a Zomboided VPN add-on, which is an alternative to the Kodi add-on of your VPN provider.

3. Set up a VPN on a router for using Kodi

Another way to use a VPN on Kodi is by setting up a VPN on your router. Having a VPN installed on your router means all the devices connected to your network will be protected. But for that, you will need a suitable router that supports a VPN client. In this way, you will be able to use Kodi without installing a VPN app on each of your devices separately.

Refer to this guide on how to set up a VPN on a router.

Note: This method is technically complicated for novice VPN users.

Why should you use VPN for Kodi?

VPN is essential to use with Kodi for various reasons. For a start, while Kodi itself is legal to use, it’s often associated with piracy. And you wouldn’t want your identity to be out there while you stream pirated content. That’s where you will need a VPN to hide your IP address so no one can identify you.

Just to be clear, we don’t condone using a VPN to cover up something illegal. Yes, practically, it does hide your identity but if you are caught using a VPN for illegal purposes, you will be dealt with by the laws of your jurisdiction accordingly.

Using a VPN is crucial if you’re a frequent user of public Wi-Fi, dabble in torrenting and need to access geo-restricted content from different countries, or simply want to hide from the prying eyes of your Internet Service Provider (ISP).

For Kodi, however, you don’t need a VPN if you’re using the platform for its mere intended purpose (that is, as a media management tool) and not for using unofficial add-ons. But let’s face it, some of the best Kodi add-ons have been made by third-party developers, and since there aren’t many official Kodi add-ons (because of its limited repo), you’re bound to use one at some point.

That’s where a VPN comes in to hide your traffic from your ISP – who’s keeping an eye on your traffic and can throttle your bandwidth if they catch you using Kodi. A VPN also helps bypass geo-restriction on add-ons that are censored or unavailable in your region.

So, all in all, if you really want to use Kodi with its full potential, you have to use a VPN!

How to download Kodi and VPN on different devices?

Here’s how you can install a Kodi with a VPN on your computer:

Set up Kodi on Raspberry Pi

Here’s how to add VPN to Kodi on your Raspberry Pi device:

Setup Kodi on your Smartphone (iOS and Android)

Here’s how you can set up VPN with Kodi on your iOS and Android devices:

For Kodi VPN setup on your iOS, you need to:

Here’s how to setup Kodi on Android Phone along with a VPN:

Have a look at our recommended VPNs for iPhone users and which ones are the top VPNs for Android users in Canada.

Unfortunately, Roku does not support Kodi as of now. However, you can still use Kodi on Roku via screen mirroring. Unfortunately, the facility is only available to Windows and Android users. But first, you need to check:

Once all of these prerequisites are met, you can screen mirror Kodi on Roku by the following process:

Most of the Smart TVs are not compatible with Kodi. However, if your Smart TV has access to a Google Play Store, you can download Kodi from it. Here’s how:

If your Smart TV doesn’t have access to Google Store, you can use Kodi by connecting your TV with an Amazon FireStick.

How to use Kodi on Amazon FireStick

To use Kodi with your Amazon FireStick, you need to:

Here are some of our recommendations of VPN service provides for Firestick.

If you can’t find Kodi on the Apple TV store app, you can install it via Cydia Impactor. It’s a third-party application that lets you download apps that are not available in Native App Stores. But first, you need to download a reliable VPN app such as ExpressVPN on your Apple TV to begin the Kodi installation process. Here’s how:

Here’s how you use Kodi on your gaming console like Xbox:

Note: you might find your Xbox Kodi app empty at installation. But don’t be alarmed! You just need to install add-ons to start using it.

The Best VPN for Kodi

Well, there’s no doubt who provides the best VPN services for Kodi… It’s obviously ExpressVPN, the best in the industry, providing ultimate security and privacy for all Kodi users. In addition, it has around 3000+ servers across 90+ countries, allowing users to have access to unlimited geo-restricted content from around the globe.

With ExpressVPN, you can enjoy fast streaming with an average speed of 95.6 Mbps on a 100 Mbps connection. Just by the way, it has a reputation of being the fastest VPN in the market! In addition to streaming, ExpressVPN is home to some pretty incredible security features like Kill Switch, Split Tunneling, 256-bit encryption, strict no-log policy, and many more. So it’s the ultimate choice for a safe and restriction-free streaming experience on Kodi.

If you want to explore more options, check out our guide on the best VPN for Kodi 2022.

Can I get a free VPN for Kodi?

Absolutely not! Free VPN for Kodi doesn’t provide guaranteed protection against malicious third-party Kodi add-ons that could pose a serious threat to your security. Besides, most free VPN services usually have overcrowded servers, resulting in excruciatingly slow speed and poor video quality streaming. So then, what’s the point of using one, right?

So, instead of wrecking your brain over free VPN services’ nuisances, subscribe to a premium VPN service such as ExpressVPN. It is fast, secure, and provides a quality streaming experience unlike anyone else in the industry.  Other than that there are some pocket-friendly VPN options if you are tight on budget. Honestly, you will come again to this blog only to thank us for this wonderful piece of advice.

What difference does a VPN make on Kodi?

A lot! A VPN on Kodi encrypts your entire connection, hides your IP address, thereby protecting your privacy and data from ISPs and other online snoopers. It’s also pretty handy for accessing geo-restricted content and add-ons on Kodi from your region.

Do I need VPN for Kodi?

Yes, you absolutely do need a VPN for Kodi for various reasons. First, for your security. While Kodi is a handy open-source media platform, it is also home to various infected third-party addons intended to hack or harm your device. In that case, you will need a VPN that encrypts your traffic and prevents malicious actors from entering your device. Second, installing a VPN on Kodi also provides you access to geo-restricted content that is not available in your region.

Finally, a VPN for Kodi also guarantees protection against the prying eyes of your Internet Service Provider (ISPs) by hiding your IP address and changing your location.

What is the best VPN for Kodi?

ExpressVPN is the best VPN for Kodi, providing 3000+ servers in 90+ countries, incredibly fast streaming speed, robust security features, and much more. Have it installed on your device or your router, and you will never regret it. With ExpressVPN, you can unleash the full potential of a wonderful open-source media platform like Kodi.

is using a VPN on Kodi legal?

Yes! It’s completely legal to use Kodi with a VPN. However, you might find some third-party add-ons that are associated with piracy. In addition, downloading or using pirated content is illegal in some countries, and hence you should be careful when using one.

To wrap up our guide on how to use VPN on Kodi, let’s have a quick recap of a few important things. First, given the kind of security threats present on Kodi, it’s incredibly essential to use a VPN on Kodi. And no, you can’t manage without it! To use a VPN on Kodi, you can either install a third-party VPN app or a Kodi add-on supported by your VPN provider.

Another way is to set up a VPN on your router that covers multiple devices connected to your home network (this process is pretty complicated, though). The most recommended way is to download a reliable VPN app such as ExpressVPN. It’s fast, affordable, secure, and easy to download.