A VPN kill switch is a feature that automatically terminates your device’s connection to the internet when it detects a VPN connection drop. This prevents your data from getting exposed to your ISP or your location to the website servers during a momentary outage.

Now, what were you thinking when you first hear about a VPN kill switch feature? A switch that kills? Activate violence? Or turn a bunch of android robots into rabid killing machines? Well, it’s not the kind of switch you might think it is…

Many VPN providers have this feature by default, but you can choose to disable it manually if you want. It may sound like an ordinary VPN feature, but believe us, you need it, especially while doing sensitive or classified activities over the internet. 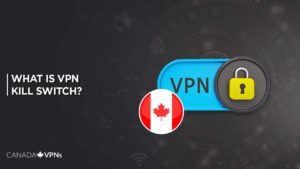 We brought this guide to let you know what VPN kill Switch really is and why you need it:

How does a VPN Kill Switch work?

A VPN kill switch works by keeping an eye over your connection status, detecting drops, terminating your access to the internet, and resuming your connection as soon as the encrypted tunnel turns back on.

Consider it as a backup plan or a Plan B. For example, when you’re using VPN to download a big torrent file. Obviously, it’s going to take several hours.

Unfortunately, VPN doesn’t necessarily stay connected for that long due to speed fluctuations, connectivity and other issues. So, when the VPN is disconnected, it will also drop a veil from your online activities and your ISP can see what you’re doing.

This is where a kill switch activates to kill your internet connection, halting your activities and thereby preventing your data from getting exposed to the ISPs.

Here’s what a VPN kill switch basically does:

When does a VPN Kill Switch activate?

A VPN kill switch activates as soon as it detects that your VPN connection has plummeted. Like we said earlier, it’s a digital Plan B; it comes into play when all other things go down.

Here are some of the situations when you might need a VPN kill switch when:

What are the Types of VPN Kill Switch?

It is designed to monitor your connection and know when you’re disconnected from the VPN server. If it does, the server sends the information to your device and prevents it from connecting to unreliable networks.

This type of kill switch is more secure than the active one. It doesn’t wait for any information from the VPN server. The moment it stops receiving signals from the VPN server, it automatically activates and prevents your device from sending any traffic.

How are VPN kill switches implemented?

When the VPN kill switch enables, a system-wide implementation terminates the internet connection of your entire device until the VPN connection restores. This makes it effective at preventing any IP and data leaks.

An application-focused shutdown might not be as safe as the system-wide kill switch, but it’s still better since the termination will be limited to the applications you choose.

This method lets you choose the particular apps you want to disconnect from the internet when the kill switch activates. So, in case of a breakdown, a kill switch will only block the connection of your chosen application to protect your data. It is more flexible than the system-wide termination as it gives you more control over how a kill switch should operate.

You can choose the following apps for the application-focused kill switch:

What causes a VPN connection failure?

There are many factors that can cause your VPN connection to drop. Some of them are listed below:

Why should you use a VPN kill switch?

A VPN Kill switch should be used when something unexpected happens, and it usually does. Even the most stable and reliable VPNs experience occasional disconnects. When the VPN connection drops, your device will likely default back to the IP address of your ISP.

So, let’s say you’re working on a highly-classified report at that time, your ISP can see the website you’re visiting or whatever you’re doing on the internet. Therefore, a VPN kill switch jumps in to protect your data from the ISPs when the digital veils drop momentarily. Consider it your last line of defense or backup strategy that makes sure your actual Canadian IP address gets never exposed.

A reliable VPN provider will always have a kill switch. Here are the top 3 VPNs with the most powerful kill switch:

ExpressVPN has a kill switch, which they call Network Lock. This is a system-wide passive kill switch that prevents your data from getting exposed to ISPs.

ExpressVPN kill switch works on Linux, Mac, and Windows. However, you cannot personalize it to work only on specific apps. Here is our complete analysis of ExpressVPN for users in Canada.

Surfshark also has a powerful kill switch feature that prevents your traffic from leaking outside the encrypted tunnel. It’s not available as a default setting, however, you can manually enable it in the settings.

Just go to the settings and toggle on the Kill Switch button. The feature is available on the major operating systems, including Windows, Linux, Android, and iOS. See more about Surfshark VPN here.

NordVPN offers a Kill switch as a default setting. It automatically activates upon connection failure and deactivates the internet connection on whichever apps you’ve selected.

NordVPN offers two types of kill switches: one for desktop, and the other one for mobile apps. Readout our review guide on NordVPN for further details.

How to set up a Kill Switch?

Here’s how you can set up a kill switch:

Please note that most VPN providers have the kill switch set as default, meaning you’re no longer to activate manually in the settings.

What are the Risks of using a VPN without a Kill Switch?

It exposes your data when your VPN connection drops, meaning your IPS and other websites can see your actual IP address and your location.

It leaves you vulnerable while using dangerous free Wi-Fi. You cannot afford a connection failure while using free Wi-Fi hotspots and public networks at hotels, cafes, and airports since these are the easy targets of hackers. And if your VPN disconnects even for a millisecond, your data will be at risk of being hacked.

Websites would know your actual location. A connection drop during streaming American YouTube TV in Canada could lead to a YouTube TV proxy error. That’s why it’s recommended to only go to the VPNs with a dedicated kill switch.


How do you test a VPN kill switch?

Here’s how you can test a VPN kill switch:

How reliable is a kill switch for a good VPN?

A VPN kill switch makes the VPN more reliable. It ensures that your data remains protected even if your VPN fails. With a dedicated kill switch, there’s no possibility that your IP address accidentally gets leaked outside. Moreover, it ensures that security and anonymity don’t get compromised.

How can I disable the VPN kill switch?

To disable the Kill switch on your VPN, follow these steps:

Is it bad to keep a kill switch on all the time?

No, it’s in fact good to leave the kill switch on while using the internet. It monitors your connection status, detects issues, and instantly reacts when your device disconnects from the VPN server.

Who should use a VPN Kill Switch?

A VPN kill switch can be beneficial for individuals who regularly deal with sensitive information such as:

A VPN kill switch acts like your buddy who covers for you. Just like how your friend saves your lie from getting exposed in front of your mom, a VPN kill switch also automatically activates to terminate your internet connection so your ISP cannot see what you’re doing on the internet during a VPN connection outage.

Therefore, it’s recommended to always opt for a VPN that offers kill switch features such as ExpressVPN, Surfshark, and NordVPN.