Add a personalized touch to your VPN connection through VPN Split Tunneling!

Almost all VPN services heavily advertise their few important features like fast streaming, unblocking capabilities, privacy, and security tools. Unfortunately, this means some very useful features don’t get the recognition they deserve. And yes, Split Tunneling is one of those underdogs.

Despite being provided by the leading VPN services like ExpressVPN, NordVPN, Surfshark, it doesn’t make the headlines on most VPN websites. Maybe its technical-sounding name has to do with it, or maybe nobody knows what this feature does exactly.

So, CanadaVPNs thought of explaining this feature to you once and for all… So, scroll down and learn what VPN Split Tunneling is and how it works. 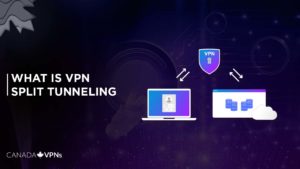 How does VPN Split Tunneling work?

VPN Split tunneling is a smart VPN feature that gives you more control over which data needs to be encrypted via VPN and which one remains open on your regular network. Okay, but how does it work? Well, to understand this complex procedure, you first need to get familiar with the basics of a VPN server. 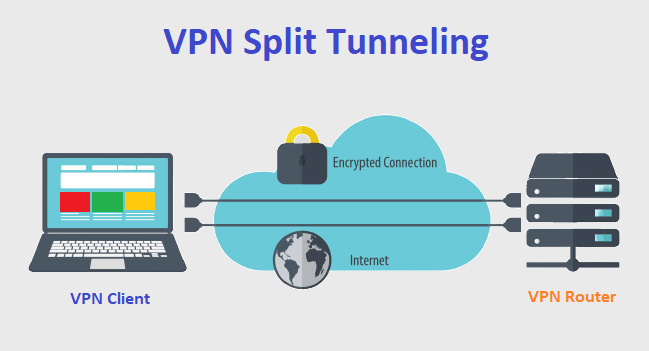 For example, when you connect to a VPN, it usually directs all your online traffic through its encrypted network – often known as a tunnel. This Tunnel is a secure connection between your device and a remote VPN server. That VPN server acts as your proxy and accesses the internet on your behalf. As a result, everything you do over the internet is being sent and received through a secure VPN server.

The additional benefit is that your data will be entirely encrypted. This means that if someone tries to snoop around, all they can see is an incomprehensible tech gibberish that takes millions of years to decrypt.

Coming back to point, because there is an additional server between your device and website, which slows down the internet speed. And that’s exactly where VPN Split tunneling comes in to prevent that from happening.

So, basically, as the name suggests, Split tunneling “splits” your network into two connections:” the encrypted VPN connection and an open, insecure connection to the internet. This enables you to protect your sensitive data without slowing down your internet speed.

Split Tunneling is implemented through multiple methods. For example:

How to use Split Tunneling on VPN 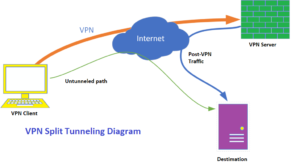 How do you stop split Tunneling?

Here’s how you can stop split Tunneling:

How do you test split tunneling?

You can test your VPN split tunneling by accessing region-restricted sites or looking up your IP address with the URLs or apps you selected. For example, you can try to access the USA Netflix library in Canada using a VPN while routing your remaining internet traffic from an un-tunneled path.

Here is the best VPN offering Split Tunneling feature at its finest:

ExpressVPN is one of the leading VPN services with an outstanding Split Tunneling feature. It can be applied to Windows, Android, Mac, or even your Wi-Fi router. It lets you manage Tunneling on a per-app basis, so you can select which apps you want to be encrypted through VPN tunnel and which one you’re comfortable letting go through the regular network. However, since it uses a per-app basis method, it won’t be effective for users working mostly on computers.

Surfshark VPN split tunnelling is quite easy to use. It operates on both a per-app and per-URL basis, allowing you to add particular apps and websites whether you want them to be encrypted or not. Unfortunately, however, the facility is available to only Android and Windows users.

NordVPN is one of the reliable VPN services with the Split Tunneling feature. It lets you use the feature through its browser extension on Chrome or Firefox. This makes it convenient to choose which sites you want them to go through the VPN and which ones the regular network.

Split Tunneling is a convenient tool that can ward off almost all major VPN annoyances. Here are some of the prominent benefits of the most underestimated VPN feature, “split tunneling:” 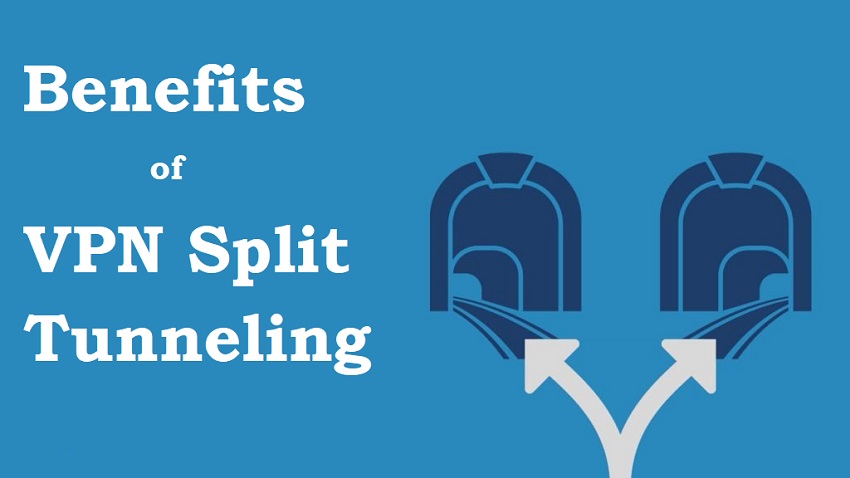 When you turn on the split Network tunneling, your connection is split into two connections, allowing only a section of your online traffic to pass through a web tunnel VPN server.

It allows you to access more than one network simultaneously

With VPN split tunneling turned on, you can get on your office network or an international network. At the same time, also remain connected to your local network. It doesn’t require you to turn on and off your VPN every time you switch between different connections. With this added advantage, you can:

When split tunneling is turned on, traffic that was supposed to be encrypted via VPN, which usually causes slower speed, is sent through your regular network. As a result, your overall internet speed increases since no encryption is done on the selected portion of your traffic.

3. Establishes a secure connection for a remote worker

VPN Split tunneling makes it easier for remote workers to access sensitive files and documents via a VPN-encrypted tunnel. And at the same time, they can access their other internet sources through their regular ISP at higher speeds.

VPN helps you bypass geo-restricted websites by assigning you an IP address of that particular region like a US IP address to access Youtube tv or getting Hulu tv live in Canada. However, with VPN Split tunneling, some of your traffic will still be routed through a regular network and some via VPN. This will allow some websites to know your actual location and show you the best content based on your location. In this way, you stream content without a foreign IP address.

5. Work on a Local-Area-Network (LAN)

Once you connect to a VPN, it will block your access to LAN, inhibiting you from accessing your printer, mouse, and other connected devices. But with VPN split tunneling enabled, you can still access local resources through LAN while maintaining privacy with a VPN.

Just like any other technical feature, there are a few security risks associated with split Tunneling. While it saves you plenty of VPN-related time and hassle, in some cases, it reduces your security and exposes your actual location.

So, every time you turn on the split tunneling feature to decide which traffic should go through the Tunnel, you’re actually taking a risk with your online privacy.

Honestly, all this decision-making gets really messed up sometimes. For example, suppose you’re using a local internet connection with most of the system. And then realize that a certain sensitive app should go to the “route through VPN” list. Looks fine, right? Wrong! Things get complicated from here.

What if that app is running more than one process on your device? And what if it’s using any background service for handling logins, checking network status, and updates? This becomes even more important that these processes should be done through the Tunnel. But how can we add them when we don’t even know such traffic exists.

You just have to rely on a blind guess which app needs to go through the Tunnel and which one doesn’t.

Well, not exactly… VPN Split tunneling isn’t as secure as routing all your traffic through VPN. Since your network gets split in half, some of your online details get seeped outside your device. However, provided with the facility to boost internet speed, using two connections at once and accessing local resources while connected to a foreign server, this minor security issue can be overlooked. After all, it allows you to maintain privacy on the traffic you care about without slowing down speeds.

But you know what? Browsing the internet with VPN split tunneling is far more secure than not using a VPN at all! So, in any case, make sure you’re connected with a VPN while you access the internet.

Why should you use Split Tunneling? 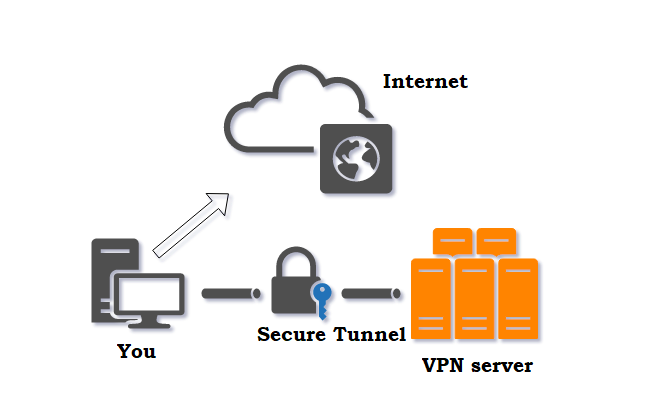 VPN Split tunneling is used to protect sensitive data without compromising your internet speeds. If you’re comfortable at splitting your online traffic between apps whose traffic you want to encrypt and apps that you’re not worried about, then VPN split tunneling could be a good tool for you.

Here are some situations when you can use VPN Split tunneling:

After discussing in detail Split tunneling, the next question comes into mind; What is the difference between a tunnel-mode VPN and a split-tunnel VPN? Well, a Full Tunnel is a phenomenon where all your traffic goes through the VPN encrypted tunnel, whereas a Split Tunnel means sending a portion of your traffic through a VPN and another portion of it through the regular network.

Technically, full Tunneling is safer than split Tunneling because it encrypts your entire traffic rather than just a part of it. It also reduces the risk of being identified through DNS or IP leakage. Obviously, full Tunneling doesn’t indicate that you will have a slower speed than Split Tunneling. But it’s definitely the more secure option than the latter.

Can I use a free VPN for Split Tunneling?

No, most free VPN services don’t have the option for Split Tunneling. Even if some services do have this feature, we recommend against using them. Free VPN services use weak encryption protocols. Free VPN tunnels typically can’t get past geo-restrictions on video streaming sites and can be painfully slow. Besides, some use fraudulent means of earning money like logging your browsing activities and selling this data to third-party advertisers. They are not only useless but also dangerous since they give people false claims of security and privacy.

Therefore, it is advised to use only premium VPN services like the ones we have mentioned in our blog. They are reliable, fast, secure, and most importantly, respect your privacy.

Traffic generated from apps and websites through the VPN via Split Tunneling has no added latency or ping time.  It’s also important to note that the traffic that does route through the VPN tunnel will have the same regular latency rate as you would get with any VPN connection. However, you can reduce the latency rate by connecting to a nearby VPN server.

What is inverse Split Tunneling?

Inverse Split tunneling is a type of Split Tunneling where you select apps and websites that you don’t want to go through the VPN encrypted tunnel. It functions the same way as a regular Split tunneling feature. The only difference is that the traffic generated from your selected apps or URLs will not go through the VPN protection, and the rest of the apps/URLs will be VPN protected by default.

VPN Split Tunneling is a pretty useful feature for adding an extra layer of security to your online traffic without slowing down your internet speed. The feature splits your traffic into two tunnels; part of your traffic goes through the VPN encrypted tunnel, while the other half goes to your regular network. This allows you to add a personalized touch to your VPN connection, encrypting only those apps and websites that you most care about.

Although not all the VPNs provide a split tunneling option. Here in this blog, we have discussed top 3 reliable VPNs i.e. ExpressVPN, Surfshark VPN, and NordVPN that are most suitable for VPN Split tunneling.