The Best Peacock Movies to Watch in 2022

Peacock is an upcoming streaming app that gives you plenty of options, keeping in mind the added advantage of the free ad-supported tier. And tons of quality films are available with a monthly subscription.

While this is true, it becomes overwhelming to peruse through the entire library and get something worth bingeing. Luckily, we have done some deep research to come up with the best peacock movies that you will love. Please note that Peacock TV is geo-restricted and only available in the USA, so in order to watch its content in Canada, you need to use a reliable VPN for Peacock TV with it. 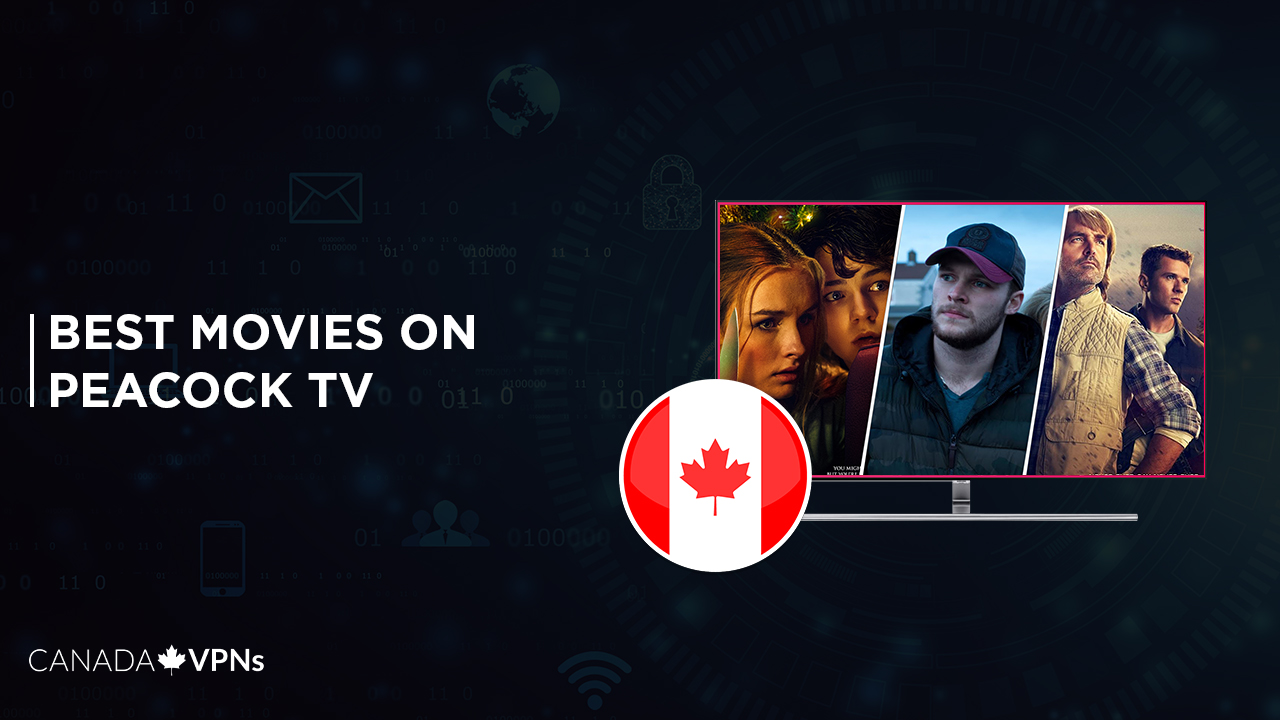 Here’s the list of best Peacock Movies you should definitely watch in 2022:

If you’re a sci-fi fan, don’t dodge this; it’s quite an interesting story

12 Monkeys is one of the best peacock movies with a perfect cast, those characters you feel connected with, the likes of Bruce Willis and Brad Pitt. The idea of this movie sprouted from a short French film La Jetée. The only difference could be that the 12 Monkeys revolves around a deadly virus while the La Jetée was about a nuclear WW3.

The movie has a post-apocalyptic world storyline, showing what transpired between the past and the future. In 1996, an Army of 12 Monkeys is believed to have released a deadly virus, with the intention to wipe out humanity, leaving the survivors to hide underground for safety.

Conversely, we find Bruce Willis in 2035, a prisoner living underground sent back in time to investigate the deadly virus and aid the scientists to come up with a cure. The question remains, could this be humanity’s warning that a pandemic was about to hit?

Bernie is one big shot that had media attention, a great piece with incredible acting.

It’s a biographical black comedy based on the Midnight in the Garden of East Texas article. The movie explores the story of Bernie Tiede, accused of killing 81 years old millionaire Marjorie in Texas.

Bernie had a close connection with the widow and frequently traveled with her even to bank errands. But things took a thorny turn when Marjorie became too controlling, and not long, Bernie killed her. The Carthage residents stayed for months without seeing her. It’s shocking to learn she was dead for nine months without anyone noticing.

If you don’t love horrors, skip this!

American Werewolf in London is one of the best peacock movies with gothic horror. One good werewolf movie you will ever come across. It features two American college students (David and Jack) on their tour to Britain. Unaware of wolves, they get attacked, and this leaves David with loads of questions about whether he will turn into a werewolf.

The movie is too frightening, but still, it has some sense of humor, so you will not have to sit at the edge of your seat for a whole hour.

The movie was an adaptation of the 2006 novel bearing the same name by Anne Rosellini and Granik. The title is related to an old Appalachian expression of how a dog digs after a winter bone.

It is a clear indication that someone is in quest of something and will not rest until it’s done. The movie features an Ozark Mountain girl, Ree Dolly, who scribbles through the mountain terrains, searching for her missing father to avoid her family’s eviction.

A worthwhile series for your binge hours!

The crime drama features Nicolas Cage as a New Orleans police sergeant. As he cleans a locker after the Atlantic Hurricane, he notices that one prisoner was not transferred. He jumps into the waters to try to save him, leading to his promotion as a police lieutenant.

During the rescue mission, he suffers from a serious back injury that forces him to live on painkillers which becomes addictive. He also uses cocaine and other drugs. Funny enough, he is tasked with investigating the murder of 5 illegal immigrants killed due to the sale of drugs to some neighborhood gangs. Will he be for or against them?

Better Watch Out is among the best peacock movies with a real twist. You will love to watch it.

The movie stars a 17 years old Olivia DeJonge, taking care of 12 years old Levi. Levi seems to be attracted to Olivia as he attempts to seduce her while watching a horror movie. But when Garret visits them, dark secrets are unveiled.

The three hear a window break, and when they go to check, they find strange words inscribed on a brick. Garret runs due to panic and soon gets killed by a shooter. Olivia has to work by all means to ensure Levi is safe from what seems like impending danger.

MacGruber is one of the favorite Peacock TV movies with awesome scenes perfectly suited for action-comedy fans. The movie is based on the Saturday Night Live sketch bearing the same name.

It features some men headed by Dieter Von Cunth from the eastern Siberian mountains who take control of the nuclear x-5 warhead. MacGruber is tasked with getting down his arch-enemy to take possession of the nuclear warhead, which is meant to destroy Washington, D.C.

Glassland is a place of love and addiction. It tells the story of an overtaxed driver (Jack Reynor) who is compassionate about caring for his alcohol-addicted mother (Toni Collete).

It shows the struggles of John, a compassionate caregiver who has reached the end of the road. Through the toils, he finds himself entangles with human trafficking, a job he must do to pay for his mother’s rehab expenses.

Starred Up is among the best peacock movies that give a realistic view of the U.K prison system. It has a master’s class in acting.

It stars Eric, a 19 years old boy, being moved from juvenile prison to adult prison. True to the old English proverb, “like father like son”, his father Neville is in the same jail serving a life sentence. Eric soon starts attacking other inmates and guards, but one prison therapist chooses to rescue him.

Starred Up is an excellent example of a prion-thriller genre. It met positive critical acclaim, especially from the cast, a good definition of what a brutal British drama should be.

The Beaver is another addition to the best movies on Peacock with exceptionally excellent performance.

The psychological drama features Walter Black, whose life becomes meaningless when he is kicked out of the house by his wife. There is nothing to console him except for a beaver hand puppet he uses for communication, and this helps him recover and soon picks up again.

The movie has real-life lessons such as family breakdown and mental illness which we can all learn from.

Unexpected is excellent. You will love the perfect performance. It stars Cobie Smulders, an inner-city Chicago teacher who accidentally gets pregnant. To her surprise, Gail Bean, one of the students, is also expecting a child. The two start to bond with plans for their future underway.

The movie has remained truthful to its original story described in the classic novel. And despite all the skeptics, As I Lay Dying is one of the best peacock movies with great performances and a perfect ending. The film features Beth Grant as she dies. Her wish is to be buried in the town of Jefferson.

Unfortunately, the wagon carrying her and her son, Darl, and his brother Jewel gets stuck. Leaving the whole family in muck, wondering how her body will arrive at its final resting place.

Black Christmas is one of the best peacock movies with an appropriate feminist theme. It’s a second remake of the Canadian 1974 film bearing the same name.

It follows a group of female students at Hawthorne College who are preyed on by an unknown stranger as they prepare for their Christmas break. They believe the killer to be among them, but the stalker won’t have to stay long, as they mount a fight to uncover the truth.

The Constant Gardener is among the best movies on a peacock with rich suspense. A story based on a real-life case that happened in Kano, Nigeria.

If you have ever read John le Carré’s 2001 novel with the same name, you know how a corrupt bureaucracy can lead to nasty events in life. The movie follows a British diplomat (Quayle) in Kenya solving the case of his wife’s murder. Quayle believes that is a secret in the corporate corruption and big business, which is about to unleash.

Gregori adopts Alexander after seeing his mother struggle alone at a hospital. After 11 years, Alexander becomes an adept assassin who is good at running assassins with other adopted kids. According to Gregori, the world is full of terrible men, and one has to be careful when carrying out his mission. One way is by putting earplugs on during the missions to block gunshots.

But finally, Alexander learns of another world where what he was taught seems to contradict. Will he be able to flee from the domineering Gregori?

Celebrating life and death is an essential occasion among the Mexicans. It’s not different from this movie, as six strangers are doing all they can to try and survive an impending deadly invasion within 24 hours.

Day of the Dead is among the best peacock movies featuring zombie invasion. It’s so horrifying, sickening; a good masterpiece for such genre’s hardcore.

If you love gory scenes, here is a clean shot.

The Descent is one of the scariest peacock movies, with real spine tingles. It follows six women who enter a cave system for an expedition. They have to learn to survive amidst the scary humanoid creatures. It is so scary to see the women struggle as the predators pursue them.

Here is another addition of the best movies on peacock with plenty of scares. Teen horror hardcores have been sorted out.

Ginger Snaps is a Canadian horror movie which can be watched via Peacock TV Canada with a reliable VPN.

The movie stars Katharine and Emily, two teenage sisters who seem fascinated by death. There is no peace in Bailey Downs as dogs die now and then. On the way to kidnap a dog, Katharine begins her period; the blood scent lures a creature that bites her.

Afterward, she starts behaving aggressively. She sprouts a tail and grows hair on the scars, leaving the suburban neighborhood in awe. Now, everyone has to deal with the deadly consequences.

The movie is based on Gregory Widen’s story. It follows an immortal Scottish swordsman who must come to terms with his immortal opponent, unveiling the issues between the interlinked past and today’s scenarios. Lambert is believed to be an immortal that can’t be conquered unless killed. And the battle between the immortal rages and those who remain head to Gathering to get the prize.

Samantha struggles to get her college life smooth. To meet her needs, she answers a call for a babysitting ad. The client tells her that she will stay at their home as the family goes for a lunar eclipse party. But soon, she realizes her clients could be harboring some dark secrets.

If you’re looking for something to binge-watch this weekend, check out our picks for the best Peacock TV shows. A reliable streaming VPN can help you break the Peacock TV geo-restrictions such as ExpressVPN and if your VPN not working with Peacock make sure the streaming device is connected to VPN.

The Peacock streaming app is worth it, thanks to its iconic content that satisfies its subscribers’ streaming appetite.

You don’t have to be overwhelmed when searching for the best peacock movies. Our selection is worth your binge time. Whether you want some gory scenes, laugh-out-loud moments, or those movies that have spanned throughout history, all are in one basket.

Peacock TV offers a Free trial before its subscription you can avail of its free plan and it allows you to cancel your Peacock subscription anytime.