Canadians are rapidly adopting privacy & encryption tools to secure themselves online, prominently the best VPN available for Canada. This surge in adopting online privacy tools began back in 2014 when the Harper government paraded terrorist threats ready to unleash on the country. In response his government introduced cyber legislation to curb terrorist threats deeming journalists, bloggers and tech companies’ threats to national security.

The enactment of Bill C-51 & Bill C-11 in Canada has been followed by major opposition from privacy advocates and tech providers alike. Being a member of the Five Eyes initiative Canada must respond with local surveillance and copyright laws like its other four members. With growing intrusive laws comes great privacy in the form of the best Canadian VPN services.

In December 2016, the Federal Liberals proposed changes to Bill C-51 demanding warrantless access to personal information of Canadian citizens in addition to ISPs retaining web browsing activities of all their customers. Tech providers have already criticized the bill and are now claiming that such legislation is making Canada “a horrible place” to do business. 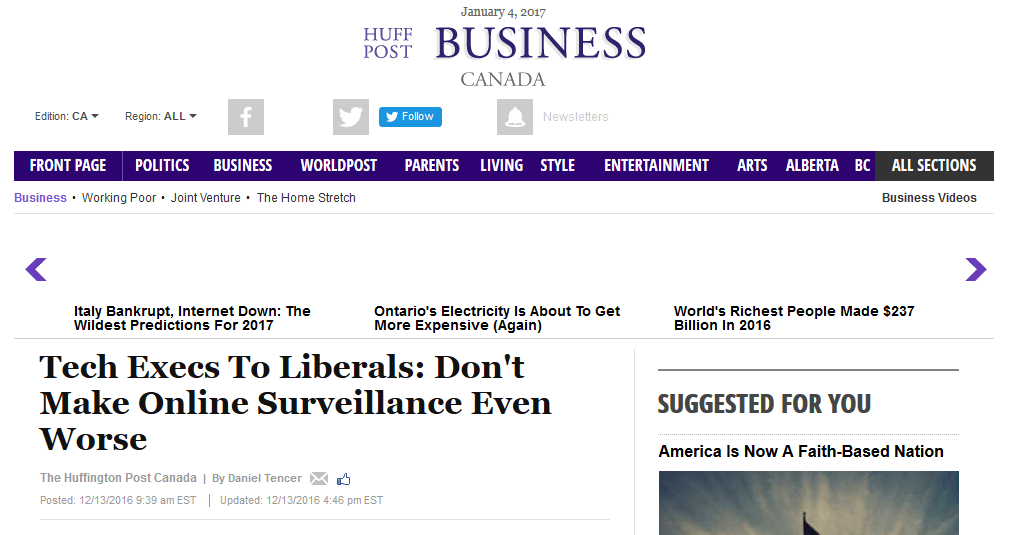 Canadian PM Justin Trudeau has already put Bill C-51 up for review to increase policing & surveillance powers across the country. While the Canadian government prepares to stomp your rights let’s have a closer look at Bill C-51 and how the best VPN services for Canada counter this massive intrusion of online privacy.

There are multiple threats & restrictions Canadians come across on the internet. These risks include state-sanctioned surveillance programs, increasing events of cybercrime and corporate instigated censorship (geo-blocking).

However, it is important to understand the scale of online threats, as identified by Hilary Homes (Amnesty International Canada) that typically people fail to understand the impact of privacy rights violations from the government & criminals alike.{:}{:es}spanish translator{:}

Introduced in January 2015 & enacted as law in June 2015, Bill C-51 was Canada’s first official surveillance legislation by from the Harper government. Salient features of the bill include:

If government surveillance and ISP data retention is not your cup of tea, then it is probably time for you to empower your online privacy with a Canadian VPN. To understand what exactly a Canada VPN is and how it secures your online privacy, let’s keep reading.

How a VPN Protects Canadians from Bill C 51

Using Tunneling Protocols & Encryption algorithms, the best VPN services for Canada ensure that no one can listen on your online communications or look at your browsing activities. Once connected to a Canada VPN, all your online activities routed through the VPN server using a new IP address. So, if you connect your Canada VPN service to a server in Luxemburg your IP address & location that websites & online service providers will see will be that from Luxemburg.

US where’s ur check mark @? Canada? 🤔 Drawin attention overseas when we too live under a surveillance state lol 🤔🤔🤔 pic.twitter.com/ABFb3WwLgj

According to an Amnesty International campaign report published in 2015, a majority of Canadians oppose surveillance by the state. The results of the survey are no surprise, since a feeling of discomfort is evident among internet users over unauthorized surveillance of ordinary citizens, giving them more reason to use a VPN for Canada. 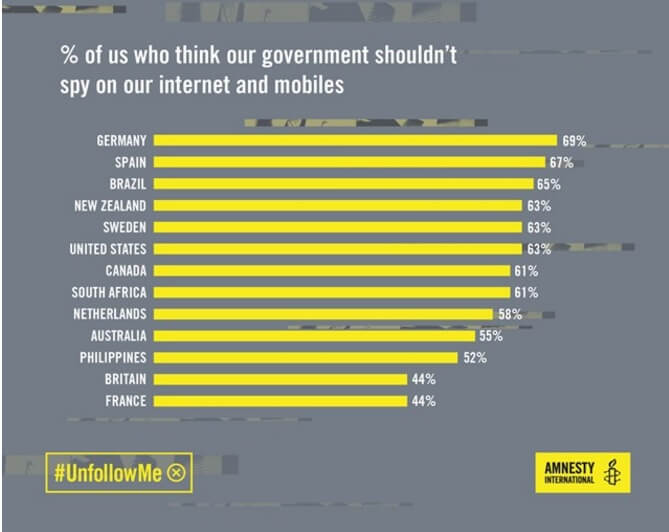 The enactment of Bill C-51 has given Canadian law enforcement agencies legal cover to monitor online activities of unsuspecting ordinary Canadians also including journalists, bloggers and tech companies. Countering terrorism & crime requires extreme measures but the reluctance of the government to improve independent oversight of state surveillance agencies, places Canada in the list of countries with weakest oversight of law enforcement agencies.

The Five Eyes alliance was a global surveillance initiative formed together with:

It is essential for you to properly test & research the best VPN providers for Canada. Not all VPN are best for Canadians as your ISP bandwidth slightly declines. For those who wish to use a Canada based VPN server we selected 5 best Canadian VPN services to test their speeds, connection stability, customer support and apps.

PureVPN is based in Hong Kong and promises to deliver freedom, security, and unparalleled privacy to its users. It provides the following services:

Ivacy is a Singapore-based VPN provider that stands for making the digital world safer and accessible for everyone. Additionally, the company offers following features:

ExpressVPN is based in British Virgin Island (BVI) which therefore provides greater privacy and anonymity according to BVI laws than US or any European law. It offers the following features:

NordVPN is a Panama based company which aims to fight for the human web rights with the aid of encryption. Furthermore, the features of NordVPN includes:

IPVanish is based and headquartered in the United States which is a top-tier VPN service provider with the most secure connection and competitive pricing. Other features of IPVanish include:

Geo-restrictions commonly refer to the process of restricting access to content on internet on the basis of geographical location of the user. Geo-blocking is a troublesome factor for movie buffs and TV lovers, who want unrestricted access to their favorite movies, music and TV shows.

For instance, streaming HBO shows and movies is available in United States only and cannot be accessed by Canadians, not without a VPN service.

Netizens’ information can be used for various purposes, including but not limited to: online banking theft, identity theft, blackmailing and stealing sensitive information from user device(s).Cyber criminals are always on the lookout for raw data to exploit, and this very fact warrants Canadian netizens to remain aware on how to prevent cyber-attacks.

Ideally, a VPN for Canada is a one stop solution for most online threats including those on public WI-FI networks. Only the best Canada VPN providers employ military grade encryption and leading tunneling technologies ensuring all user online activities are secure & hidden.

Benefits of  VPN for Canada

The Best VPN providers for Canada must maintain strict online privacy, robust data encryption, and DNS leak protection. VPN is one of the easiest for Canadians to ensure privacy and protection of information. Ideally VPN providers should offer the following benefits to Canadians:

The best Canadian VPN helps them maintain anonymity online by masking their IP address, replacing it with one from its servers. When netizens use a VPN in Canada, no one including government surveillance, ISPs, and cyber criminals can trace their network or IP address; thus providing VPN users absolute privacy, and freedom to browse, watch or write whatever they want.

Amongst the many challenges facing every internet user, data security is the biggest. Using the services of the best VPN in Canada, all the information sent or received is automatically encrypted. For Canadians, VPN is the best option to take back their internet freedom.

VPN encrypts data into a series of alphanumeric characters, ensuring that no one on the other end can read messages and steal personal data (banking, health, shopping and documents) in case there is a breach.

Online banking is highly vulnerable against data breaches, due to the nature of weak banking security. Certainly, this issue is critical for Canadians due to the growing internet penetration in the country.

Cyber criminals and identity thieves are the greatest threat to online banking. To ward off these threats and ensure secure online banking always consider using the best encrypted VPN for Canada. Data encryption offered by VPN helps Canadians protect valuable banking information. Even, if hackers or cyber criminals manage to infiltrate their information, they can never decipher it.

Canadian VPN servers may not be the best way to access Hulu’s content because it is exclusively available for US citizens only. On the contrary, VPN for Canadians would be an ideal solution for HULU entertainment fans.

Normally, The best Canada VPN providers have servers located in different countries to facilitate subscribers, which is why it is important to select such providers located in regions with comparatively flexible privacy and data retention laws.

Simply put, the best VPN of Canada may not be the best for Canadians to access geo-blocked content, instead, VPN providers based in the Cayman Islands, Europe or Hong Kong would be better option.

Torrents and Canada don’t get along very well, and we would recommend discontinuing this practice until, Canadian torrent lovers can protect their identity.

How do you that? Using a VPN would be a good start!

For Canadians, torrenting through Canada VPN offers two advantages. First, data encryption makes online activity unreadable to ISPs, oblivious of what the user is downloading. Secondly, VPN hide user’s original IP making it impossible for websites, peers, and others to identify or trace the user.

However, it is highly recommended to subscribe to VPN based outside Canada as local vendors provide user data upon government requests. To save our readers the trouble, we have ranked the top VPN providers for Canada in the table above (providers not based in Canada).

Always remember to review the logging policies of the VPN providers, and select (particularly for torrenting) VPN that maintains no log.

What to look for in the Best Canada VPN Service

Among the huge range of VPN providers, just how do netizens choose best VPN for Canadian cyberspace? There are crucial features a user must consider before selecting the top VPN for Canada, these include:

Tunneling protocols create a virtual tunnel between VPN user and VPN server, making it impossible for cyber criminals and surveillance techniques to infiltrate the network connection. A VPN Tunnel is the first layer of protection, which is further strengthened through data encryption.

The following table compares leading edge tunneling protocols offered by best Canada VPN providers .  OpenVPN is highly effective but can be blocked by most ISPs and websites; on the contrary L2TP/IPSec is commonly used for transferring highly sensitive information.

Hide Your IP with the Best Canadian VPN

IP masking refers to hiding the real local IP address of the VPN user. A Canadian VPN service accomplishes this by replacing user IP addresses with one from its many servers around the world. This ensures the ISP cannot retain user data, hackers cannot pinpoint the location of VPN user devices and surveillance cannot identify the user within local cyberspace.

For instance, if a Canadian VPN user connects to a server in the USA their IP address will be replaced with a US IP address, ensuring all restricted websites are unblocked and the ISP has no idea what the netizen is doing online.

Similarly, decrypting a message encrypted through 256-bit would take almost twice that time. Thus, VPN users in Canada can rest assured, as it is virtually impossible for any government agency or cybercriminal to access their information.

If a user wish to access content available in other regions of the world (as we discussed in the geo-restrictions section), then we recommended Best Canada VPN Service providers that offer global server networks. For instance, accessing HBO entertainment available only in US would require best VPN service for Canada that provides servers in US.

Do remember that carrying a boat load of VPN servers does not make a provider excellent. The server infrastructure is necessary to deliver high speeds. As is the case of every Canadian VPN provider, bandwidth loss is experienced irrespective of how fast broadband netizens have.

Normally, premium VPN providers for Canada follow “no logs” policies. Yet, internet users must be aware that VPN providers do maintain logs in some form. For instance, Canada based VPN may store users’ personal information, servers they are connected to, and website they access when using the VPN service.

If a VPN provider for Canada does not offer multi-device and multi-platform compatibility, then there is less incentive to select it. Also look for following value added features, as only  best VPN provider in Canada will offer them:

VPN are ideal tools for netizens to secure their online activities, social profiles, communications (emails, chats, messages etc.) within Canada. Increased surveillance, copyright infringement and cybercrime have revolutionized user privacy on the modern internet. It is essential for Canadians to value their online privacy and empower it with only the best VPN for Canada.

Leave us your feedback, personal reviews and comments below.