What are the Common VPN Protocols? Explained and Compared!- [Jan 2022]

Uncover the mystery behind complicated acronyms of VPN protocols!

There seems to be a new reason to get worried about your online privacy every day. Data breaches, repressive censorship regulations, exploitations of private data, and so much more. Only if there was some way to reclaim control of our privacy…. Enter: Virtual Private Network (VPN)

VPNs have long been a popular choice for people seeking more privacy in their everyday internet browsing. A VPN works by creating tunnels between your device and a remote VPN server, encrypting all the data that goes through it. These tunnels are formed with different programs and processes called VPN protocols.

However, outdated protocols can be incompetent and may not offer enough security or privacy as the new ones. Bear in mind that there are multiple types of encryption protocols, each of which provides different solutions to internet security, privacy, and anonymous internet browsing.

Therefore, if you use a VPN service, you need to know the various VPN encryption protocols and what they do. Also, it’s important to ensure your provider uses the best and more secure ones. That’s why we’ve compiled this guide to educate you about VPN protocols so you can make an informed decision while purchasing a VPN service. 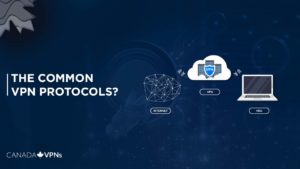 Running out of time? Here’s the quick guide on the different VPN protocols used by VPN services:

What are VPN Protocols? 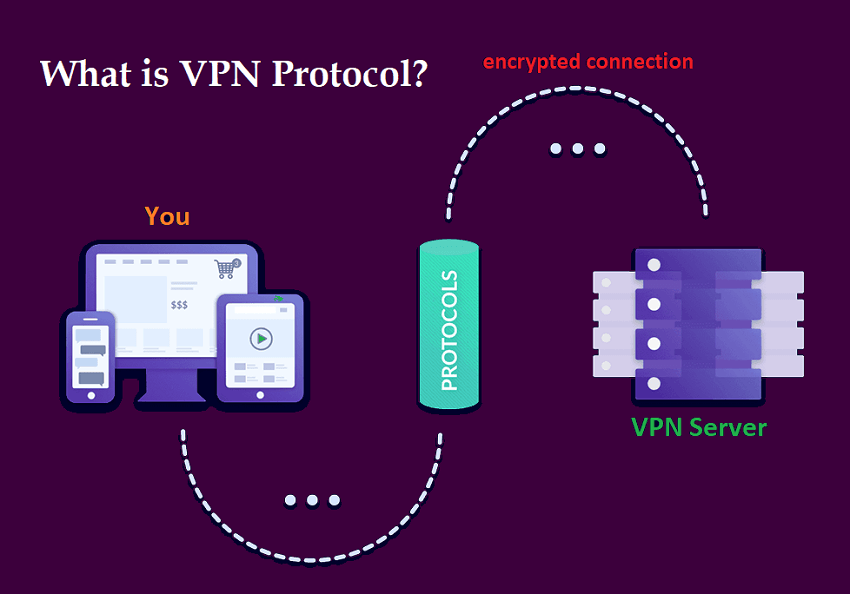 A VPN protocol is a set of programs or rules that dictate how data will be packaged and delivered over a VPN tunnel. These protocols have varied specifications based on the benefits and preferred scenarios. For example, some VPN protocols prioritize security over speed while others focus on quickly transferring data packets for boosting speed. But they more or less perform the same function:

Also, note that there are two primary approaches to VPN functionality:

Just to be clear, no VPN protocol is perfect. Obviously, there is always room for improvement – Some have security flaws, and others have slow speed. So, let’s delve into each protocol and see which one suits your needs the best:

Check out these six common VPN protocols and their pros and cons:

Wondering what is OpenVPN? OpenVPN is an open-source protocol used by many VPN providers. It allows developers to access its underlying code and runs on either the TCP or UDP internet protocol. The combination of these two protocols ensures that your data will be delivered in the right order with fast speeds.

This protocol is also known for its use of AES-256-bit key encryption with 2048-bit RSA authentication along with a 160-bit SHA1 hash algorithm.

When can OpenVPN be used?

OpenVPN is the wise choice when you need an extra layer of security while carrying out day-to-day browsing activities like connecting to public Wi-Fi, accessing sensitive information, or using financial accounts.

Layer 2 Tunnel Protocol is usually combined with IPSec for security. L2TP was jointly developed by Microsoft and Cisco in the 90s. So, it’s relatively older than OpenVPN and does not provide any encryption or privacy. But when it is fused with security protocols like IPSec, it becomes extremely secure and has no known vulnerabilities.

When can L2TP/IPSec be used?

You can use L2TP when shopping online or performing banking operations. It is also secure when you combine several company branches into one network.

Developed by Microsoft, Secure Socket Tunneling Protocol (SSTP) has fully integrated every Microsoft operating system since Windows Vista SP 1. It uses 256-bit SSL keys for encryption and 2048-bit SSL/TLS certificates for authentication. Despite being primarily designed for Windows OS, the protocol is also available to other devices.

When can SSTP be used?

This VPN protocol is best for bypassing geo-restrictions and enhancing privacy while browsing the internet.

Internet Key Exchange version 2 is a commonly used VPN tunneling protocol that offers a secure key exchange session. Like L2TP (and IKEv1), – is usually paired with IPSec for authentication and encryption.

When can IKEv2 be used?

IKEv2 is good at re-establishing the link after a temporary connection loss and efficiently switching connections across network types (from Wi-Fi to cellular data, for example).

Point-to-Point Tunneling Protocol (PPTP) is one of Microsoft’s oldest VPN protocols, created in the mid-90s. This protocol was incorporated into Windows 95 and particularly designed for dial-up connections. But with the advancement of technology, PPTP VPN’s basic encryption becomes inefficient and can quickly be compromised. Since it lacks many of the security features found in the latest protocols, it can deliver the fastest connection speeds for users who may not need heavy security. In fact, this protocol is still being used in some applications, but most providers have since upgraded to faster and more secure protocols.

When can PPTP be used?

You can use the PPTP VPN  only for streaming. Other than that, you should go for a more advanced VPN protocol option.

WireGuard is the latest and fastest tunneling protocol in the VPN industry to date. It utilizes ultra-modern cryptography that outclasses the existing leaders – IPsec/IKEv2 and OpenVPN protocol. However, this protocol is still in the experimental stage, so VPN providers have to look for other protocols to overcome WireGuard’s shortcomings.

When can WireGuard be used?

With WireGuard’s fast speed and connectivity, this protocol is mostly used by Netflix VPNs,  Best VPN for gaming, VPNs for torrenting, or can be used for downloading larger files.

Here is a quick roundup of all the above-explained VPN Protocols;

Which VPN protocol is the best?

Well, the best VPN protocol is a pretty subjective term. It depends on your preferences, needs, and the nature of your activities over the internet. The best for you is not necessarily the best for me. For example, if you’re an avid binge-watcher, you probably use a VPN for unblocking geo-restricted content than someone who uses it for gaming. Some might go for security, and others prefer speed. So, there’s no definite answer to this question. To determine which VPN protocol is the best for you, carefully consider what you need the most out of your VPN connection.

What is the fastest VPN protocol?

WireGuard is the fastest VPN protocol to date, offering speedy connection than the rest of the VPN protocols while also keeping you safe over the internet. Moreover, it offers enhanced battery life for mobile devices. However, if you’re looking for speed and speed alone, go for the oldest VPN protocol, PPTP, which lacks security features but offers incredible speed for gaming and streaming purposes.

Other than that, IKEv2/IPsec is also considered a fast and secure VPN protocol to fulfill your VPN needs.

Which VPN protocol is the most secure?

What is the most stable VPN protocol?

IKEv2/IPsec is regarded as the most stable VPN protocol. It offers a robust connection when switching between networks without compromising your security.

Which VPN protocol is the best for torrenting?

If you’re a torrent buff and looking for a reliable file-sharing protocol, you should go for the one that is both fast, stable, and secure. Fortunately, IKEv2 has got all of these features.

Which VPN protocol is the easiest to set up?

PPTP is probably the easiest VPN protocol to set up because of its widespread compatibility. Since it’s outdated and notorious for several security issues, we don’t recommend going for this one. Instead, opt for LETP/IPsec and IKEv2 that are also relatively easier to set up.

If you set out to purchase a VPN service for yourself, you need to know what type of VPN protocols they offer. Since all VPN protocols are designed for different purposes, it is important to consider what you need from a VPN connection.